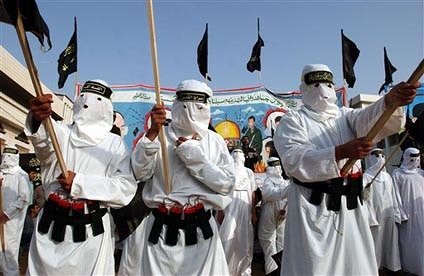 August 25, 2014 7:00 am 1
Syria rebels in south emerge as West’s last hope as moderates crushed elsewhere
I dare you to defeat ISIS
The bastards are stoning our women

I would like to inform you about two technologies I believe will have an impact should President Obama strike ISIS/ISIL in Syria without striking the Assad regime forces.

One technology permits the Arab Sunnis to connect with each other (Facebook) and the other permits them to hide their identities by bouncing their Internet connections through thousands of proxy servers (TOR); both available with few mouse clicks.

In other words, the reach of ISIS/ISIL to recruit clandestinely will be inexhaustible. If the President singles ISIS/ISIL without also striking Assad, the Arab Sunni street would interpret it as a conspiracy to cleanse the Sunnis ethnically as Assad is doing in Syria. The optics of Makkah is different from the optics of Big Ben. Using the technology, ISIS/ISIL message of Sunni ethnic cleansing, unlike al-Qaeda?s stale message, would be a far more potent message. Once that campaign begins, the terror group will shock us again as it did in Iraq.

Within that context, ISIS/ISIL would become a far bigger threat to our allies than any other terror group because it would be able to hide in inconspicuous Arab homes and spread like locust because of high unemployment rates in Arab countries. The mixture of ethnic cleaning message and wandering young Arab men would be like rocket fuel for ISIS/ISIL.

If President Obama had surrounded himself with advisers who understand the Arab mindset, its interpretive nuances, and its traditions, he would leave Syria alone for ISIS and Assad to battle each other in the hope the rebels of the Free Syrian Army would be the last man standing. Since he refused to arm the FSA, which has led to this bazaar of terror, Obama needs to avoid another mistake, which would be far deadlier.

Many contemporary Arabic books never fail to mention victories or defeat of Islam throughout our history. There is a reason why al-Baghdadi calls the West the Crusaders. The fanatics? sense of justice will never lie dormant with the dead; they will never forget or forgive, they will just fight as the Prophet Mohammad fought and conquered before them.

Almost 70 years into the birth of Israel and the Palestinians still want to throw the Jews in the sea. More than its frightful meaning, the history lesson in that fact is priceless for anyone to understand an Arab mindset.

ISIS/ISIL will be able to recruit because of the damage caused by Assad due to his torture chambers and the gassing of Sunni women and children. When IRGC and Assad?s snipers targeted the uteri of pregnant women combing for food crumbs for their dying children in a city that Assad starved to death, he gave the fanatics a new lease on life. In a way, Assad is more dangerous to the minorities than any moderate Muslim in Syria could ever be, He stirred Muslims in 50 different countries and pushed them to fanaticism with his savagery and the consequences will be dire for all of us.

The worst part is that Assad turned many Muslims into extremism when he targeted the Sunnis in a deliberate sectarian war to rally the minorities behind him; he did it just so HIS family continues to rule. I truly pity the minorities who fell for his traps.

Syria is the first civil war to be documented with tens of thousands of videos and photos like no other war in human history because it happened just as phone cameras and the social media rise became fixtures of everyday life. Extremists will parade this trove ad infinitum to recruit and exact revenge on Assad and the Alawite community, the majority of whom, as ironic as this may sound, support Assad today because they are afraid of fanaticism; the one he deliberately created.

Car bombs and suicide bombers in Damascus will become, unfortunately, as routine as a Friday prayer. Once ISIS/ISIL goes underground, its battles will shape into suicide attacks.

So far, Obama has not made the decision to strike ISIS/ISIL in Syria. If he does, he should strike both ISIS and Assad to stem the tide of the recruiting machine of the fanatics. Otherwise, as Assad has caused ISIS/ISIL to grow out of control, Mr. Obama?s policy would swell their ranks to cause far more damage in the future.