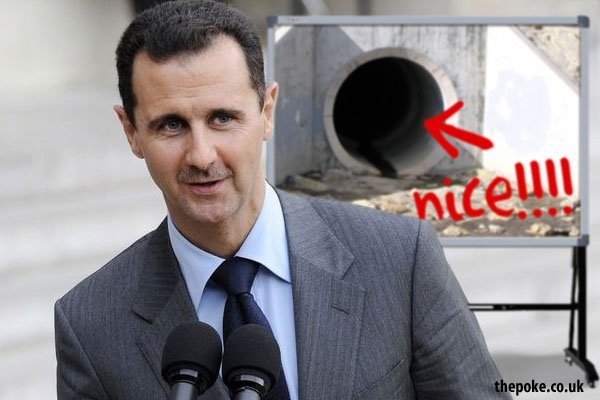 An imaginary memo on Syria

War departments across many powerful nations have developed superior strategic and analytical units whose work entitles their Generals to a sort of an Aladdin Lamp if you wish. No, there is no rubbing here, but there is plenty of excruciatingly difficult problems to solve in order to foresee the future.

From one of those countries, this imaginary memo was circulated recently to describe what might happen in Syria and in particular what role Assad is playing today to keep the Syrian civil war going. To protect the innocent, I have taken the liberty to edit the content of the memo to avoid the mentioning of any names or acronyms associated with a department or a system. The crux of the memo follows.

?So far, [edited] has succeeded in infiltrating both the Assad regime higher echelons of power to include Command and Control as well as the Syrians AQ elements fighting on the ground. Our assessment is as follows:

?Assad thinks this war is winnable. His knowledge periphery is partially blocked by an effective psychological warfare that [edited] has, with the help of [edited} carried out with great success. We have reason to believe that every time Assad makes a war decision, his is based on partially disjointed information the Iranians and the Russians seem at odds in understanding?.

The memo goes further into the pressure Assad is feeling from a war he continues to think he is winning.

?Assad and his entourage are under constant pressure to yield momentous battle results. This has created a cooker-pressure environment and resulted in Assad calling too quickly the small battles his armies waged and won as if his regime won the whole war. Even when his losses mount in other parts of the country. In reality, the Assad regime, with the Iranians backing him to the hilt, find themselves playing catch-up on too many fronts.?

?It is imperative for Assad to continue to believe that just another battle will be decisive enough to win the whole war just as much it is important for the Syrian opposition to believe military aid is coming their way. In Assad chasing his tail, the strategy in place will drain Iran economically and psychologically in a process [edited} hopes to begin to weaken the country. In fact, Syria for Iran today has become what Afghanistan was for the Soviet Union in the eighties?.

?Furthermore, arming the rebels on the basis of diminishing the capabilities of Assad without harming the morale of his armies must remain a focal point in Syria. The balance between one?s army morale and the other army?s fighting spirit must be maintained in order to achieve the long-term goals of breaking Iran?s military and economic will; and the more Assad claims a ?turning point? in Syria?s civil war in his favor, the better will be the standing of all the [Edited] with regard to negotiations with [Edited}?s?.

?Assad must always think he can win this war in order to escalate downward to his supporting troops and militants the notion of hope. Without it, conspiracies from within the inner circles of the Alawite security apparatuses will hatch to replace Assad with a more realistic figure who may negotiate a settlement to the war, something [edited], [edited], and the services of [edited] believe is not in our best strategic and geo-political interests. So far Assad has complied with our wishes and his supporters remain intellectually and physically drowned in the details of survival and vengeance, which suits the purposes of the strategic interests of [edited]?.

?Furthermore, the fact that Saudi Arabia has bought into this strategy and has committed to its success has helped quiet the Sunni front and has helped [edited] to concentrate on Iran rather than on a Sunni-Shia divide?.

The imaginary memo goes into other details about who Assad?s replacements might be if the Alawite community awakens to the trappings of [edited}. Most of the names were unfamiliar, which leads me to believe Syria?s war will only end when Iran?s economy is drained and its meddling in foreign lands take its toll on the Iranian masses.

6000 Sunni Jihadists vs. Armed-to-the-Teeth 500,000 Pro-Iranian Terrorists
You can’t comfort the afflicted without afflicting the comfortable
Why Does It Take a Fire?
Assad Genocide 429