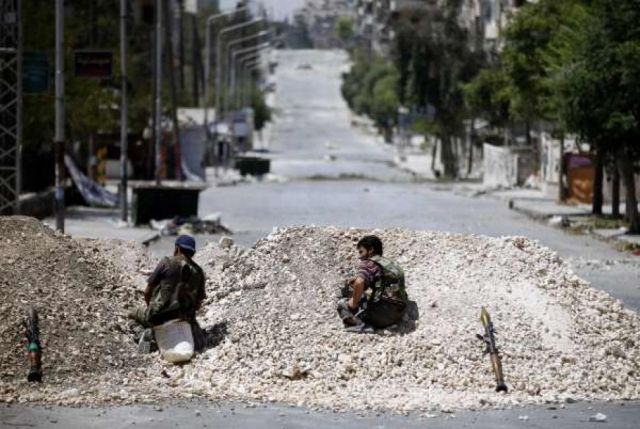 Last week, President Obama finally articulated his “red-line” threat for military intervention in Syria as the regime’s movement or deployment of chemical weapons. Unfortunately, this suggests that everything but Bashar Assad’s resort to weapons of mass destruction may be further tolerated by Washington, at least until the U.S. election.

Syrians don’t seem inclined to wait to see who the next White House occupant will be before getting on with their revolution. Although the rebels are being pounded by the Syrian Air Force, their morale remains high and their gains are steadily improving.

You can cross from Turkey into Syria and drive for about an hour and a half without encountering any Syrian military presence. A few weeks ago, I spent the night in the town of al-Bab, 40 miles north of the besieged city of Aleppo.

After weeks of intense shelling, al-Bab had been completely liberated and even showed promising signs of a civil society in the making. When the sun goes down, townspeople sweep the streets and pick up rubbish. Every activist and rebel I spoke to there said that they’d sooner die than go back to the way things were before.

They may have no choice. Last week, more than 40 civilians in Azaz, another town north of Aleppo, were killed in an air raid that leveled their houses and a bus station. The rebel headquarters, just blocks away, was not hit. If the Syrian Air Force is this incompetent, then intervention will carry few dangers. If it is this evil, the urgency of imposing a no-fly zone is even greater.

U.S. policy has been a muddle of contradictions and half-baked excuses that risk robbing Washington of any influence it might have in a post-Assad Syria. The standard rationalization against even arming the rebels is that anti-aircraft missiles might wind up in the hands of jihadists.

So instead of taking an active hand in organizing Syria’s rebels, the administration now looks on as extremists exploit popular disillusionment with American passivity and recruit more fighters to their cause.

Some might argue that any Syrian willing to ally with Al Qaeda out of desperation is one we needn’t try to help. But tell that to a father who has been strapped to a chair and forced to watch as his young daughter is gang-raped byshabiha thugs. How likely is he to forbear when, instead of American warplanes overhead, there comes a knock at his door by a depraved foreigner with experience in handling explosives?

Misguided American passivity is leaving the field to others who are actively working to shape the Syrian opposition in a manner that doesn’t reflect Western values. Most of the cash pouring into Syria from Saudi Arabia and Qatar is going to religious fanatics. Salafists are Riyadh’s preferred proxy; the Muslim Brotherhood is Doha’s.

Rebels buy the bulk of their materiel from corrupt regime personnel or from smugglers. Right now, it’s the Salafists and Muslim Brothers who can afford the best weapons. Most secular rebels are left with Kalashnikovs and RPGs, which are not sufficient for downing MiG fighter jets or helicopter gunships.

America’s strategy of sideline spectatorship is therefore proving a double-barreled failure: It prolongs the regime’s lifespan while creating fertile conditions for extremists to thrive.

The absurdity of the policy is illustrated by the correspondence between Mahmoud Elzour, a Syrian-American who fought in Aleppo, and Robert Ford, the former U.S. ambassador to Damascus.

Elzour explains that moderates comprise the majority of rebels — “80%” — but also that the “2%” who are Salafists are “the strongest on the ground” because they have “the most advanced weapons, money and support from . . . the Gulf countries; they even have payroll.”

The Muslim Brothers, he writes, “will help you if you are one of them and share with them the same ideology,” noting that he was recently excluded from a bomb-making seminar in Istanbul because he disagreed with the Islamist instructor’s vision for a future Syria.

Elzour’s email is titled “need your advice” and he ends by asking what he ought to do. The reply from Ford is a form letter reaffirming the White House position on providing only “humanitarian and non lethal assistance to nonviolent opposition groups.”

This is Ford’s valediction: “I encourage you to increase your coordination with groups that adhere to the principles.”

Hamza al-Khatib was a nonviolent 13 -year-old boy who was snatched off the street in Deraa by Assad’s mukhabarat . His bloated and empurpled corpse, missing a penis and much skin, was then returned to his family with the threat of further punishment should they speak out about what had really happened to their boy. That was in May 2011.

If American policy is, in effect, asking the Syrian people to endure more of this without getting our help and without taking the help that is being offered to them by others, can we really expect anything other than their lasting enmity?

Weiss is research director at the Henry Jackson Society.