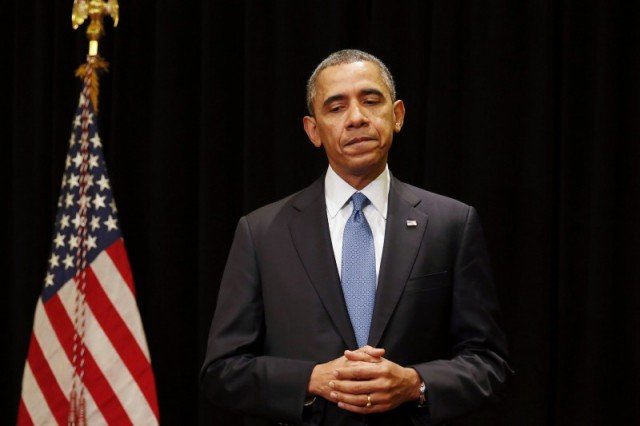 July 18, 2014 9:11 am 0
It is not about domestic terror, it is about international terror
Barack Obama is Happiest When Jews Suffer
Saudi King Abdullah Hated President Obama

President Obama hardly shows his face during a crisis and every time a crisis breaks around the world, the community organizer we elected is fund raising rather than protecting Americans.

It is the Syrian Syndrome all over again. Had Obama armed the Ukrainian Government properly, the world may have averted another Putin’s act of terror. The same way had he armed the moderate Syrian fighting Assad, we would not be looking down the gun barrel of the Islamic Caliphate today. This is how Obama is earning his Nobel Peace Prize by letting violence expand exponentially in every troubled region of the world.

According to the Washington Post, Obama, in six years, held 393 fund raising events while President Reagan held only 80 events. One spent his time leading and the other spent his time organizing.

When he actually appears to lecture us about the crisis, he always says that we need “to get to the bottom of what happened”. During his appearance to address the Malaysian Airline tragic pro-Putin missile attack, Obama said:

“… and today I want the Dutch people to know that we stand with you shoulder to shoulder in our grief and in our absolute determination to get to the bottom of what happened.”

After his Syrian red line fiasco, this get-to-the-bottom president has not committed to anything more than to “getting to the bottom” of another crisis on his watch. What he will do to avert such tragedies in the future is not really on his agenda. This is not why he signed on to become a President.

Happy golfing Mr. get-to-the-bottom president and adios, until the next crisis we hope you will “get to its bottom” as well.

Why should he make any decisions when he can ignore them all together to enjoy another day knobbing with billionaires and entertainment celebrities? President Reagan may have been an actor but Barack Obama is using his Presidency to become one.

For crying out loud, offer him a role in some movie and maybe he will act as a President next time we have a crisis on our hands.

During the next tragedy, if our President says, “we will get to the bottom of what happened”, maybe the press ought to ask him what he will do AFTER he “gets to the bottom”.

If the press keeps ignoring the obvious, it may, next tragedy, find itself in the middle of his fires instead of reporting them.

What a Vacuum in Leadership Looks Like
Who Are These ISIS Guys and Why Is Obama Willing to Bomb Them?
Be brave, the Khameneists are coming
Slippery Barack Obama 976