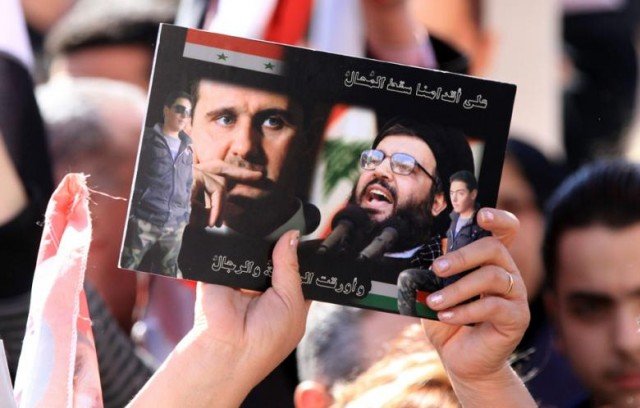 Does anyone doubt that four heads of states share the responsibility behind the Hamas terror attacks against Israel to include Putin, Khamenei, Assad, and Obama? Each of these men is complicit, directly or indirectly, in creating the violent conditions spreading across the whole Levant region. If you do have any doubts, then you need to have your head examined. Meet the Jew killers.

Indirectly: Putin, one of the indirect Jew Killers

Putin, the Russian peasant thug, is responsible for supporting America’s enemies. Why? As a token of revenge for the Cold War losses the Soviets sustained at the hands of Ronald Reagan. Lucky Putin had to wait for Barack Obama, undoubtedly our weakest President ever, to ascend to power; that is before exacting his revenge upon the clueless Millennial Americans. These yearlings may be scratching their heads as they cross “Hope and Change” with “Evil and Terror”.

Putin’s moral currency is violence and terror, something very few in the US media dare to mention for fear of compounding the problems their exceptional leader is facing in his bunker White House.

Turning a blind eye to Hezbollah’s terror makes him a Jew killer.

Khamenei, for his part, is a character out of the comic books we might as well call The Joker. The man lives physically in the 21st Century but his brain cooks its ideas in the caves of the 9th Century just as crudely as his counterparts in Gaza cook theirs in the 7th Century. This small detail matters little to Western diplomats all eager to show their crossword puzzle skills engraved in documents Khamenei will use as toilet paper once he emerges from his cave triumphant and illuminating the skies with phosphorous shiny substances.

Khamenei is using Hamas as a proxy to kill the Jews in Israel; but more importantly, to study how Israel responds to prepare Hezbollah with effective countermeasures. This is how stupid the leadership of Hamas is; it has become the Guinea Pigs (Every pun intended) of a Twelver his own brand of religion Hamas curses with profanity. If Charles Darwin lived, Hamas would set the perfect example for Darwin to prove his natural selection process in this half-witted organization.

Indirectly: Assad, one of the Jew Killers

Then you have Baschar al-Assad of Syria. This barbaric, tie-wearing terrorist is a master of proxy wars; even Putin is learning from him in the Ukraine. No one better than Assad can peg Sunnis against each other, and with them any chance of purging his DNA traces from this planet. When he cannot find any Sunnis to carry out his evil deeds, he uses Hezbollah’s Shia to kill Sunnis (i.e. PM Rafik Hariri of Lebanon); Hezbollah goes along because Nasrallah is even dumber than Mishal and Zahar combined. We pity the Shia parents who embraced Hezbollah hoping to coagulate their rights into cohesive and effective policies only to find out their sons are dying for the cause of religious zealotry.

Assad is delivering missiles to Hamas it can use to revenge the attacks Israel carried out against his troops for another smaller proxy incursion in the Golan Heights (Watch the TV interview Israeli Ambassador to the US Ron Dermer gave to the Hannity show pointing the fingers at Syria and Iran for the weapons Hamas receives).

Israel has no choice but to take Assad out. After over 3 years of extreme violence against his own people, he is now turning his attention to killing Israelis. Unless a stray bullet mysteriously kills Assad, he will always find a way to harm the Jews of Israel. He just cannot help himself, and if you want to know why, the death of his brother Majid will shed some light on the mental derangement his family suffers from that finds solace and refuge only in extreme violence.

Indirectly: Obama, one of the Jew Killers

Finally, we have our own President to thank for the violence and terror exploding across the whole Middle East.

Whether you believe he is a true isolationist unable to grasp the risks of his inactions.

Alternatively, whether you think, as we do, that Obama has deliberately surrounded Israel with her enemies because he is, deep in his heart, a closet anti-Semite, all of this matters little.

The man has permitted events in the Levant to spiral out of control; and because of his ideological inclinations, Obama has increased exponentially the danger America and its loyal allies face.

Unlike others, we read into Obama claiming Israel has the right to defend herself, in the wake of his wanton apathy, as nothing more than “Israel can now send its soldiers to die defending herself from the enemies I surrounded her”.

If so, we pity all the American Jews who voted for Obama. As far as we are concerned, they are truly a sorry lot.

Assad’s Secret: Evidence Points to Syrian Push for Nuclear Weapons
The Third Speech is a Charm
US Policy in the ME: When Confronting a Virus, Build More Hospitals
Opinions 1017 Radicalism 567 Slippery Barack Obama 976 Support U.S. Allies 152