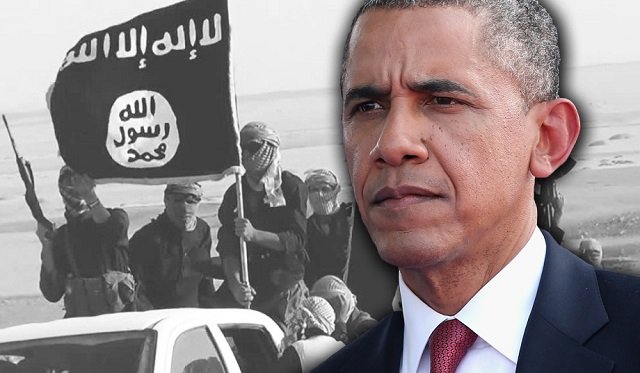 August 30, 2015 10:06 am 0
The Paper Bag President
An imaginary memo on Syria
Watch The Three Musketeers of Terror Lose Their Marbles

To score political points, the accusation du jour is to label your opponent to have started ISIS. Call it the ISIS political football.

The latest ISIS political football comes to us via one of prime minister David Cameron’s military commanders. The former head of Britain’s Armed Forces has blamed Prime Minster David Cameron for the rise of ISIS, the Daily Mail reported on Saturday.

General Sir David Richards, who was chief of Britain’s defense staff, has said that Cameron should have used strong military force to stamp out ISIS when the group first emerged as a threat. The revelations come in a new biography of Cameron by political biographer Sir Anthony Seldon.

Back in May of this year, Senator Rand Paul accused the hawks in the Republican Party of creating ISIS. He told MSNBC:

Right now there are 1,500 groups, many of them bad people, including ISIS, that hawks in our party have been arming. ISIS exists and grew stronger because of the hawks in our party, who gave arms indiscriminately, and most of those arms were snatched up by ISIS.”

What Paul forgot to say in this charade was that the U.S. never gave consequential weapons to the rebels in Syria. ISIS snatched these weapons from spoils of war in Iraq.

Mr. Paul is intelligent enough, and his misreading of recent Middle Eastern history is so flagrant, that he might be trying to deflect attention from his own misjudgments. In Mr. Obama’s second term, the U.S. has largely followed Mr. Paul’s foreign-affairs preferences to the letter, and the result has been more chaos and disorder.

How did ISIS start? Because we are experts on Syria, we can tell you unequivocally who are the real ISIS founders.

ISIS in Syria started when Assad released many of his hardcore Islamist prisoners and fed them fat with secret oil contracts to threaten the region. Why? Because Assad needed to point the finger at his stronger alternative to survive politically. And it worked because very few speak today of regime change in Syria. the choice has become either Assad or ISIS.

How is that for a commander-in-chief remiss in his duties?

So while Assad forged ISIS, Obama let him have his way and ignored all warnings. In our book, the ISIS political football sits squarely between Baschar al-Assad and Barack Obama.

The funny thing is that no one is accusing Assad and Obama of the ISIS misdeed.

Sorry Papa, Only Violence Against Assad Will Spare Us Assad’s Violence
Syrian Doctors to Show the US Evidence of Assad’s Use of Chemical Weapons
Is Obama Looking Forward to Target Syria with Drones?
Slippery Barack Obama 967