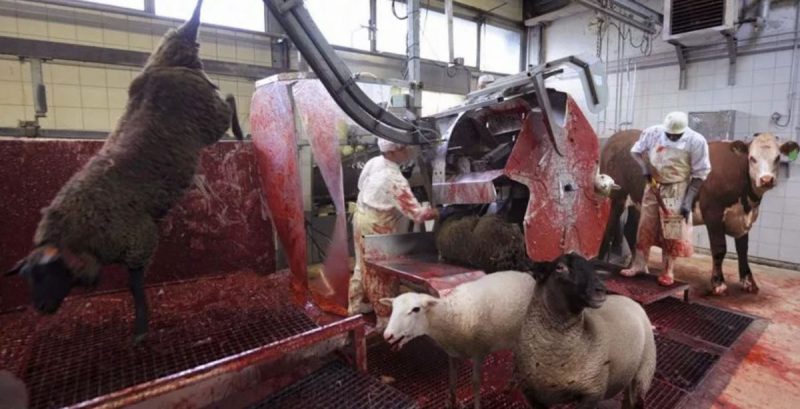 August 24, 2018 8:59 am 0
US Britain United Behind Assad Regime Action
When We Defeat ISIS, Others Will Replace It
Assad Survives US Strikes for Another Upcoming Massacre in Idlib

Ever since Russia has established a robust military presence that helped Assad remain in power, Falafel has been asking Buthaina Shaaban, one of Assad’s gatekeepers, to interview the man who destroyed a whole country. Then suddenly it happened. Finally Falafel interviews butcher Assad.

Falafel: What should I call you Mr…?

Assad (Interrupting): Call me Mr. Butcher. You will understand in a minute.

Falafel: The first question is: Why here?

Butcher Assad: I want the Syrians returning to know what awaits them. I want them to fear like they have never feared before.

Falafel: Don’t you think Mr. Butcher this is counter-productive to building a sustainable society?

Butcher Assad: I don’t want a sustainable society. I want to torture and kill. Fear is the glue that holds Syria together.

Falafel: If not sustainable, how will Syria’s economy ever free the country from dependency on others?

Falafel: Which kingdom are you talking about? Your father’s era is long gone. The oil Sheikhs no longer fall for any barbaric extortion scheme.

Assad: You think so? Wait until Putin occupies Yemen to help the Houthis

Falafel: What happens if Europe decides it needs the Syrian refugees to build its own labor force? Would you say your scheme of pressuring Europe for reconstruction funds has backfired?

Butcher Assad: The longer my Syrian labor take refuge in Europe, the more votes pro-Putin EU political parties would command. Eventually, I am going to get every one of those dirty slaves.

Falafel: What do you intend to do with the Syrians returning?

Butcher Assad: The first order of the day would be a new presidential decree stating that every refugee would be forced to visit the dungeons above us with their hands tied behind their backs to experience the sensation of total submissiveness. Calling me Mr. Butcher is by design.

Falafel: Why killing and torturing is so important to the Assad family?

Assad: Good question. Because we can and because the world ignores our terror. Regime change, my ass.

Falafel: Do you torture just Islamists for confessions?

Butcher Assad (Laughing): I torture anyone that stands in my way. Women, children, old men, moderates, seculars, Islamists, human rights activists. If you are Syrian, your ass is mine. Even if you are not, your ass is still mine.

Falafel: The problem is that you also torture the innocent.

Butcher Assad: If the West does not care, it’s a green light and a wink as far as I am concerned.

Falafel: I heard a rumor that the Orthodox Church is nervous about its future now that it backed you during the war.

Butcher Assad: I made it difficult for them not to back me. Fostering ISIS was a brilliant move, don’t you think?

Falafel: One can only cry wolf once.

Butcher Assad: The West dementia says otherwise. Democracy may be good for Americans, but it’s even better for me.

Butcher Assad: Every four years, a new administration demonstrates its dementia when it concocts new policies for Syria. They always seem to forget the terror I unraveled on the previous administration. How could new policymakers apply their new ideas if burdened by the past? Forgetting my terror is a political convenience that serves us both.

Falafel: Do you think it will end at some point?

Butcher Assad: It may end for other Arab regimes, but not for the Assad family. We are a special breed of savages the world still does not fully grasp. That’s why we exist. The West needs me to wash its dirty laundry. Who is going to torture Islamist terrorists except me?

(Screams from people being tortured could be heard above)

Butcher Assad: Just before our interview, he visited the cells above with a loaded gun. He killed 13 prisoners, two of whom were women. Hafez has been trained to kill since he was 11 years old. He is far worse. I am so proud of my killer son.

Falafel: What does he like to do in his spare time?

Butcher Assad: Visit the prisons with a loaded gun. He loves that.

Falafel: How do his classmates deal with his violence?

Butcher Assad: They hate him. Just perfect to build a great Syria.

Falafel: From her Facebook page, it seems your wife Asma still enjoys shopping?

Falafel: What effect the war had on her?

Butcher Assad: Funny you should ask. She does not know there is a war going on. Just absorbed buying shoes each pair worth a small car.

Falafel: What about the sounds of artillery heard over Damascus once in a while?

Butcher Assad: She smiles every time she hears the bombs. She thinks the people of Syria are celebrating her taste for fashion. The more cannons, the more she buys and posts pictures on Facebook.

Falafel: The West wants Iran out of Syria to help in the reconstruction. What do you say to that?

Butcher Assad: We reached a decision on that. We are going to play hardball. Once the West bites, Iran would leave Syria voluntarily. We get the funds. Then, I invite Iran back in. It’s like taking candy from John Kerry.

Falafel: But Israel won’t bite. It will seek guarantees.

Butcher Assad: We will give them guarantees. Just like we gave Obama guarantees our stockpiles of chemical weapons were destroyed. Dementia Falafel!!

The interview was over because the blood streaming was now a deluge. The screams continued unabated during the whole interview. Falafel has to cover his nose from the stench the environment produced. As he was leaving, a military Jeep passed him loaded with corpses of young children.