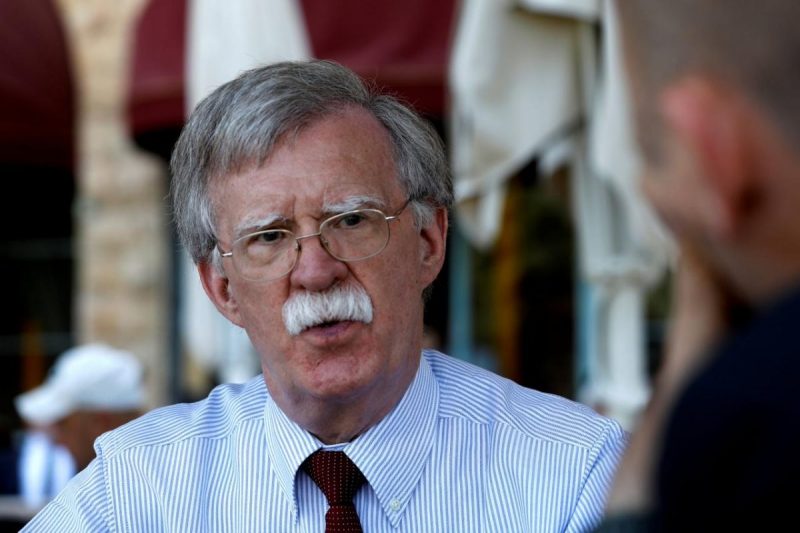 Putin Drowning in Syria’s Quicksand is Looking for a Rope

U.S. National Security Adviser John Bolton said that Russia is “stuck” in Syria. It is looking for others to fund post-war reconstruction there describing this as an opportunity for Washington to press for Iranian forces to quit the country. In other words, Putin drowning in Syria’s quicksand is looking for a rope from Washington.

Bolton, speaking to Reuters while on a visit to Israel, said U.S. contacts with Russia did not include any understanding over a push by Damascus’s forces against the rebels in Idlib. But he warned against any use of chemical or biological weapons there.

Under President Donald Trump, the United States has sought to disengage from Syria, where the previous administration deployed some troops and gave limited support to rebel Kurdish forces over the objections of NATO partner Turkey.

Bolton sidestepped a question on whether these measures would continue, saying the U.S. was staying in Syria to carry out some specific objectives; even as Putin drowning is looking for an exit.

Our interests in Syria are to finish the destruction of the ISIS (Islamic State) territorial caliphate and deal with the continuing threat of ISIS terrorism and to worry about the presence of Iranian militias and regular forces.

At a news conference in Jerusalem on Wednesday, Bolton voiced support for Israeli strikes in recent months on sites in Syria where he said Iranian-supplied missiles and other “threatening weapons” had been deployed.

I think that’s a legitimate act of self-defense on the part of Israel.

Russia, Assad’s big-power backer, says it is committed to destroying Islamic State insurgents but has been more circumspect about the involvement of Iran, another foreign power reinforcing Damascus. Putin drowning in search of funds to rebuild Syria.

Bolton said that Vladimir Putin had told the United States that Moscow could not compel the Iranians to leave Syria.

But he also told us that his interest and Iran’s were not exactly the same. So we’re obviously going to talk to him about what role they can play. We’re going to see what we and others can agree in terms of resolving the conflict in Syria. But the one prerequisite there is the withdrawal of all Iranian forces back in Iran.

Bolton meets his Russian counterpart, Nikolai Patrushev, in Geneva on Thursday. The Kremlin responded to the interview by alluding that Bolton might not be welcomed.

Washington wields leverage in its talks with Moscow because “the Russians are stuck there at the moment,” Bolton said.

And I don’t think they want to be stuck there. I think their frenetic diplomatic activity in Europe indicates that they’d like to find somebody else, for example, to bear the cost of reconstructing Syria – which they may or may not succeed in doing.

Bolton left the door open to assist in Syria’s reconstruction in the future if certain conditions are met.

The Idlib region is a refuge for civilians and rebels displaced from other areas of Syria. Because of Jihadist forces, it was hit by a wave of air strikes and shelling this month. Assad does not differentiate between fighters and civilians. His bombing campaigns carpet whole towns and villages.

Asked if there was any U.S.-Russian understanding about such an operation, Bolton said:

No. But we’re very concerned as we look at the military situation and we want to be unmistakably clear to Assad that we expect there will be no use of chemical weapons or biological weapons if there are any additional military hostilities in Idlib.

In April, the Trump administration mustered a coalition of U.S., French and British forces to attack Syrian government facilities related to the production of chemical weapons after a poison gas attack killed dozens of people in Douma district. Many analysts considered the attack to rank high on spin, low on effectiveness.

Asked how the United States might respond should there be a chemical attack on Idlib, Bolton said: “strongly”.

They (the Syrians) really ought to think about this a long time before they come to any decision.

Putin Drowning in Syria’s Quicksand is Looking for a Rope