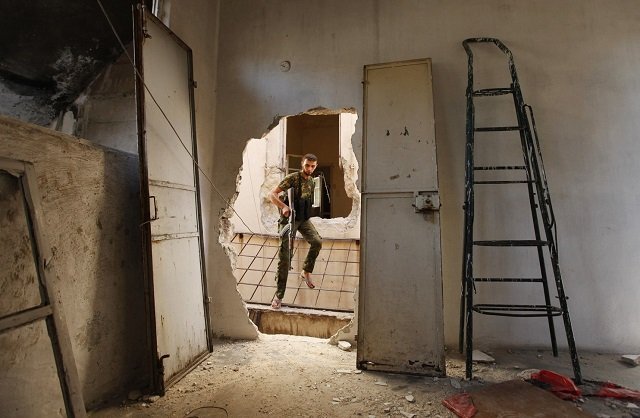 September 29, 2013 4:38 am 0
In Syria’s war, Alawites pay heavy price for loyalty to Bashar al-Assad
Pity the Russian People Led by Putin
If Assad is Not Deposed Now, Next Time It’s US Bootprints

TFS Note: This is a major defeat for the Obama Administration because those who know the Assad regime well know Assad does not think it is worth the ink the document is printed with. Assad bought himself a jail-free card in return for a promise he intends to partially keep. He remains a dangerous madman killing civilians at will.

The resolution, adopted by a vote of 15 to 0, does not spell out what penalties the government in Damascus might face if it doesn’t comply. U.S. and European diplomats conceded that some of their toughest wording aimed at compelling Syria to obey the council’s demands and holding perpetrators to account for using chemical weapons was removed from the final resolution at Russia’s insistence.

Still, the measure constituted the first legally binding action on Syria from the Security Council since the government of Syrian President Bashar al-Assad launched a brutal crackdown on peaceful protesters in early 2011.

The conflict has descended into a brutal civil war, leaving more than 100,000 dead and threatening to engulf the region in sectarian conflict. Russia had previously blocked all attempts to punish or condemn Assad at the Security Council, which can order mandatory sanctions or military action.

“This is the first hopeful news on Syria for a long time. Tonight, the international community has delivered,” U.N. Secretary General Ban Ki-moon said. He urged the council’s big powers to follow up by convening a long-awaited ­Syrian peace conference in Geneva by the middle of November.

The agreement binds Syria to turn over its chemical arsenal but provides no automatic punishment if Syria balks. Enforcement would require further negotiation, setting up the prospect of more tussles between the United States and Russia.

The White House claimed victory, citing the prospect of weapons inspectors entering Syria as soon as next week to begin the work of auditing and dismantling the country’s chemical stockpile. “This is something that we have long sought,” President Obama said at the White House on Friday. The deal worked out this week on the sidelines of the annual U.N. General Assembly will be “legally binding” and enforceable, Obama said, with “consequences for Syria’s failure to meet what has been set forth in this resolution.”

But the council action received a cool response from the Syrian opposition. “We don’t believe the removal of chemical weapons will end the suffering of the Syrian people. Therefore, we have emphasized the need to do more to end the war and particularly to stop the regime from using heavy weapons against population centers – particularly ballistic missiles and jets,” Ahmad al-Jarba, president of the Syrian Opposition Coalition, told reporters in New York.

Secretary of State John F. Kerry hailed the council action as a show of unity that promises the elimination of one of the world’s largest chemical weapons stockpiles, one that had remained secret for decades. The United States and its allies say the arsenal was used in an Aug. 21 attack that killed about 1,400 Syrians, including more than 400 children, many as they slept.

“The U.N. Security Council has demonstrated that diplomacy can be so powerful it can peacefully defuse the worst weapons of war,” Kerry told the Security Council. “Our collective resolve hardened tonight with a strong, enforceable, precedent-setting resolution requiring Syria to give up its chemical weapons.”

But Russian Foreign Minister Sergei Lavrov made it clear how difficult it will be to penalize Syria in the event it cheats, noting that Friday”™s resolution includes no “coercive” measure to ensure Syria’s compliance.

He said that “violations” of the agreement and “the use of chemical weapons by anyone will have to be carefully investigated by the Security Council of the United Nations, which will impose penalties only in the event that violations are serious enough to merit punishment” and are “proven by 100 percent,” a threshold that could be insurmountable.

Assad agreed to eliminate Syria’s chemical weapons program by the middle of 2014 under Russian pressure and following global outrage over the Aug. 21 sarin gas attack, the deadliest chemical attack in 25 years. The United States and its allies blamed the Assad government for the attack; Assad and his Russian backers said the rebels were responsible.

The resolution says Syria “shall not use, develop, produce, otherwise acquire, stockpile or retain chemical weapons,” or transfer them to others.

In the event of noncompliance, the resolution says, the Security Council can “impose measures under Chapter 7 of the United Nations Charter.”

Diplomats were also meeting Friday in hopes of setting a date for a peace conference that would bring together representatives of Assad’s government and the U.S.-backed political opposition trying to oust it. A political settlement seems a long shot, however, especially since the Western- and Â­Sunni Arab-backed rebels have further splintered this week.

The OPCW is scheduled to produce by Nov. 15 a timeline that details a series of disarmament milestones that Syria will be required to meet in order to “complete the elimination of all chemical weapons material and equipment in the first half of 2014.”

U.N. weapons inspectors are also finalizing investigations into seven incidents where chemical weapons are alleged to have been used in Syria.

The inspectors are scheduled to leave Syria on Monday and present a final, comprehensive report on their findings to the U.N. secretary general by the end of October.

U.S. and European diplomats concede that some of their toughest wording aimed at compelling Syria to obey the council’s demands and holding perpetrators to account for using chemical weapons was removed from the final resolution at Russia’s insistence.