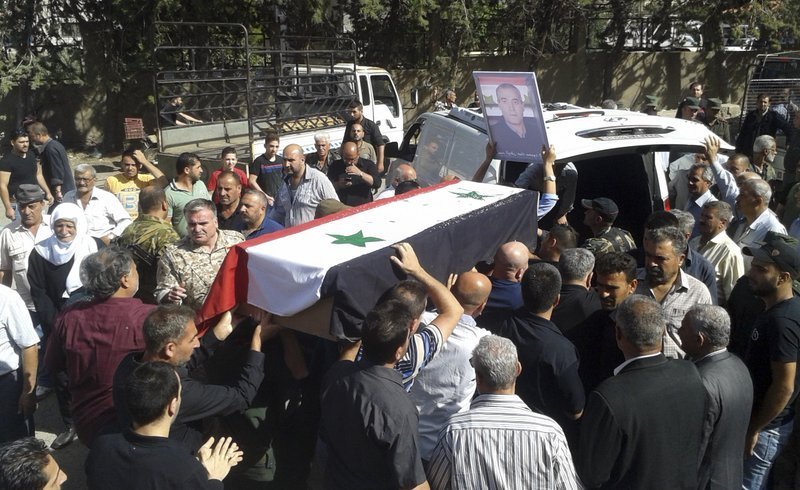 July 26, 2018 10:37 am 0
IS came with a hit list, left Syria town in a trail of blood
Failed State Macabre
Iran Strikes US Troops. Israel Strikes Iran in Syria

Islamic State terrorists strike Druze villagers in southern Syrian city and surrounding countryside killing, at last count, 216. The attack began in the early hours of the morning and lasted for hours. By far, the IS attack represents the worst violence to hit the area since the country’s civil war began.

During the civil war, the Druze, due to political calculations, have either remained neutral or sided with the Assad regime. Very few joined the resistance to Assad. Some fought with the Assad forces. Today, pro-Assad sympathizers mainly control Sweida.

The attack began with the scene of several suicide bombings, including one at a busy vegetable market. The attack left a trail of devastation and set in motion the ensuing coordinated assaults.

IS militants also attacked a number of villages in the northeast of the Sweida province. There, local militias and residents took up arms to fight the advancing militants.

The Britain-based Syrian Observatory for Human Rights put the death toll at 246, including 111 members of local militias who fought IS militants who swarmed their villages. At least 135 civilians were among the killed, the Observatory said.

Hassan Omar, a government health official in Sweida province, said on Thursday that at least 150 people were wounded in the attacks; some of them were in critical condition.

Sweida News Network, an activist-operated Facebook page, said many of the killed were shot in the head. The SNN said the militants sneaked into the villages under the cover of darkness, shooting residents as they slept.

The Observatory also reported bodies found killed inside homes and that the militants had also abducted some residents, their fate unknown.

The rare attacks in Druze-controlled Sweida came amid a government offensive elsewhere in the country’s south. Government forces are battling an IS-linked group near the Golan Heights and near the border with Jordan. The group also has a small presence on the eastern edge of Sweida province, and in the desert in the adjacent Homs province.

The United States has largely defeated IS in Syria and Iraq, but still has pockets of territory it controls in eastern and southern Syria. Many IS terrorists have also gone underground.

The extremist group boasted that its “soldiers” killed more than 100 people in Sweida.

In a statement posted on the group’s social media channels, it said its militants carried out surprise attacks on government and security centers, sparking clashes with Syrian troops and allied militias.

The Islamic State group posted no death toll for its own men in Wednesday’s fighting.

Vladimir Putin and Baschar al-Assad fostered the birth of the Islamic State in a bid to sway the west to back the Assad regime instead.