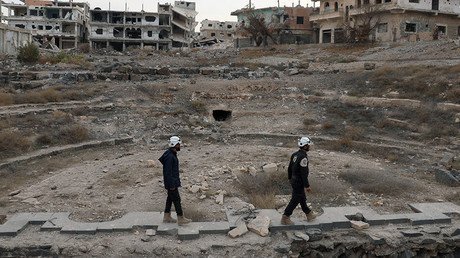 The United States has credible information that Russia and Syria are trying to “sanitize” the site of a suspected chemical weapons attack in Syria while denying access to the area by international inspectors, the State Department said on Thursday. In effect, the State Department accuses Russia and Syria, directly, of an attempt to sanitizing the chemical attack site in Douma.

Department spokeswoman Heather Nauert said the team of inspectors from the Organisation for the Prohibition of Chemical Weapons (OPCW) had not been given access to the site of the alleged attack in the town of Douma on April 7.

While repeating that Syria was responsible for the attacks, Nauert also said the United States had credible information that “people on the ground have been pressured by both Russia and Syria to try to change their stories.”

Western countries say scores of people were gassed to death in the attack. Russia and its ally deny that.

A U.N. security team came under fire in Syria on Wednesday while doing reconnaissance for inspectors to visit the sites of the suspected attack.

The United States, Britain and France fired missiles at Syrian targets on Saturday in retaliation for the suspected chemical use. The missile attack was widely criticized for its small effect. Some experts believe the chemical production facilities can go online again in days.

Nauert said the United States worried that the evidence would “deteriorate” the longer the inspectors were delayed.

“That is of great concern to us,” she said.