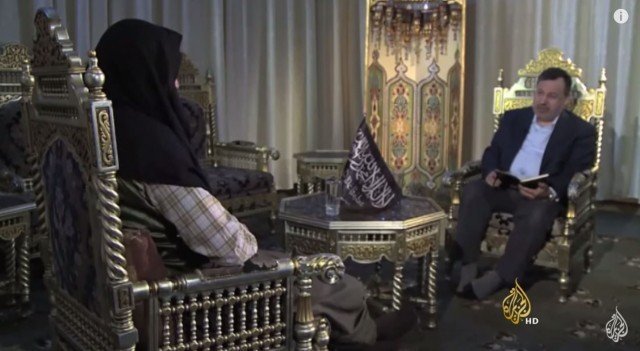 Al-Qaeda Fooling No One

In a mesmerizing interview on al-Jazeera, head of al-Nusra Front Abu Mohammad al-Golani told his audience that Nusra is only after the Assad regime, not the West (See full interview in Arabic below).

“The orders from Dr. Ayman al-Zawahiri are we should not attack the West from Syria, because it won’t help us, and it may complicate the situation.”

Prior to coming to Syria in January of 2012, al-Golani was stationed in Iraq where his mission was to kill U.S. troops. If anyone believes what this man has told al-Jazeera, they need to have their heads examined. He will kill Americans and attack America again if given the chance. Al-Qaeda fooling no one.

There is a good reason he has adopted the pseudo ‘al-Golani’ in reference to liberating the Golan Heights by terrorizing Israel. At RPS, we want to see Assad held accountable for his crimes and if Jaish al-Fath can get the job done, so be it.

After Assad, though, we need to turn our attention to the likes of al-Golani. There is no room for terror in the region by anyone no matter their motives, religion, or affiliations.

The interview had all the sectarian accouterments that people expected. Alawites are called “Nusayrah”, a sacrilege denunciation of someone else’s faith. Sunnis are called “Ahl al-Sunna”, which diminishes other Muslim sects such as the Shia. It is rather hard to listen to al-Golani because while you want this enemy to oust another, this enemy is as abominable as any.

One thing al-Golani said that we agree with. He told the al-Jazeera audience that the Obama Administration (He referred to it as America) is supporting the Assad regime because it bombed only Sunnis. The Arab perception RPS has been citing over and over is now cemented in the minds of most Arabs, which revolves around America is siding with Shia terror against Sunnis.

We should thank the genius Denis McDonough for his opposition to Obama’s red line.

Otherwise, one could not but squirm listening to al-Golani speak. Al-Qaeda fooling no one.

Al-Nusra Front is an affiliate of al-Qaeda operations in Syria and Ayman al-Zawahiri is the Egyptian-born Usama bin Laden’s replacement.

Al-Qaeda fooling no one with their propaganda. After the Assad regime is deposed, it will unite the West and the East to defeat fanaticism.

After Assad, U.S., Russia, and Saudi Arabia would have no choice but to work together for a terror-free Syria. This statement is not true as long as Assad remains in power.

Al-Qaeda Fooling No One Against Its Ideology of Destruction