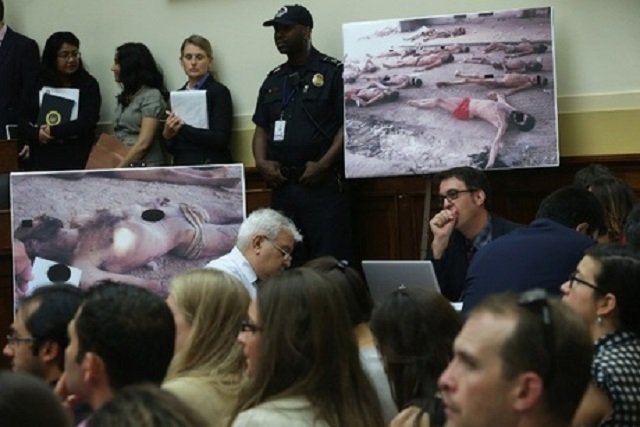 The Assad Crimes Against Syrians, Some Not Older Than 14 Years

December 16, 2015 7:27 am 0
Losing Snowden to Phony Red Lines
Between Spilling and Containment of the Syrian Civil War
The Naked Foreign Policy of Barack Obama

Photographs of thousands of people who reportedly died in government detention centers in Syria present “damning evidence” of crimes against humanity, Human Rights Watch said Wednesday. They represent the Assad crimes against Syrians with some as young as 14 years old. The same Assad the Western world cannot find the courage to militarily remove him from power and prosecute him for his horrific crimes. As if the existence ISIS was not an effect worthy of the Assad danger.

The rights group conducted a nine-month investigation into more than 28,000 photographs smuggled out of Syria by a military defector codenamed Caesar.

The pictures appeared to show the bodies of some 6,000 Syrian detainees — often bearing marks of torture or starvation — who allegedly died in government detention centers or after being transferred to military hospitals.

“We have meticulously verified dozens of stories, and we are confident the Caesar photographs present authentic — and damning — evidence of crimes against humanity in Syria. These photographs show peoples’ children, their husbands, their beloved family members, and friends that they spent months or years searching for.”

Out of thousands of photos, HRW researchers identified 27 individuals and collected accounts from friends, families, and fellow detainees to piece together their stories.

The watchdog said one of the victims, 14 year-old Ahmad al-Musalmani, died in government detention after being held for having an anti-regime song on his mobile phone in 2012. These are the Assad crimes against Syrians the world is ignoring today.

Ahmad’s uncle, Dahi al-Musalmani, spent years trying to find his nephew as well as more than $14,000 in bribes to secure his release.

“I went directly to the folder of the Air Force Intelligence, and I found him,” he told HRW, breaking down while talking.

“It was a shock. Oh, it was the shock of my life to see him here. I looked for him, 950 days I looked for him. I counted each day. When his mother was dying, she told me: ‘I leave him under your protection.’ What protection could I give?”

HRW called on countries seeking peace talks on Syria’s crisis to prioritize the release of thousands of detainees.

Russia and Iran, as the top backers of Syria’s psychopath torturer Baschar al-Assad, have a “particular responsibility” to secure immediate access to detention centers for international monitors.

“The government registered these deaths, processing dozens of bodies at a time, while taking no action to investigate the cause of death or to prevent yet more people in their custody from dying. Those pushing for peace in Syria should ensure that these crimes stop and that the people who oversaw this system ultimately face accountability for their crimes.”

Happy you voted for Barack Obama who took a balcony seat while this happened under his watch, and who still dithers today afraid of offending our worst enemies?

The Assad Crimes Against Syrians, Some Not Older Than 14 Years

US Policy in the ME: When Confronting a Virus, Build More Hospitals
In 2015, Assad and ISIS Caused the Deaths of Over 55,000 People
Syrian opposition claims missile attack on Assad’s mother’s funeral
Assad Genocide 429