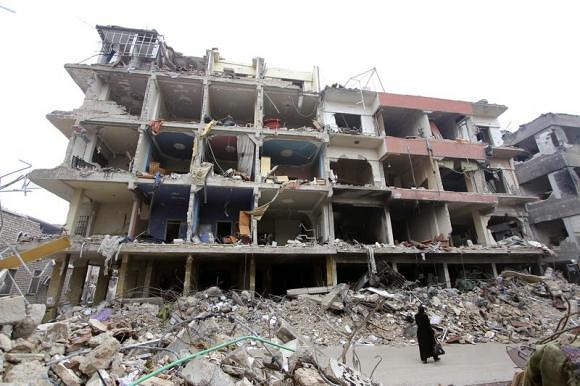 100 killed in week of clashes in south Syria

(Beirut AFP) – Nearly 100 fighters on both sides have been killed in a week of fighting in southern Syria between regime forces and rebels, the Syrian Observatory for Human Rights said Saturday.

The army, backed by fighters from Lebanon’s powerful Shiite group Hezbollah, began an offensive at the beginning of the week in Daraa, the province bordering Israel that was the cradle of the revolt against President Bashar al-Assad.

Regime forces had indicated that the operation was aimed at “breaking the band of territory (the rebels) are trying to create” along the border.

At least 50 rebels were killed and 43 soldiers, members of Hezbollah, Iran’s Revolutionary Guards and Syrian pro-regime militia, according to the Britain-based monitor, which has a network of civilian, medical and military sources across Syria.

The Observatory also said 10 soldiers had been executed after being accused of collaborating with rebels in Daraa by giving them information about military movements.

“Hezbollah doesn’t have a lot of confidence in the Syrian army because there have been several cases of soldiers giving the rebels information,” Observatory chief Rami Abdel Rahman told AFP.

His group said Hezbollah, which is reported to have some 5,000 fighters in Syria, is leading the regime offensive in the south.

The rebels and their al-Nusra Front jihadist allies have been making advances in southern provinces that are strategic because of their proximity to Damascus, Jordan and the Israeli-occupied Golan Heights.

Since the start of October 2013, rebel forces have controlled a band of territory in the sector along the border with Jordan.

100 killed in week of clashes in south Syria

Where Does Israel Stand on Assad Remaining in Power?
We Still Don’t Know Why Obama Wants Deal With Iran
Sarkozy: 8,000 Killed in Homs in 3 Weeks
Radicalism 548 Syria News 1045 Syrian Revolution 1348