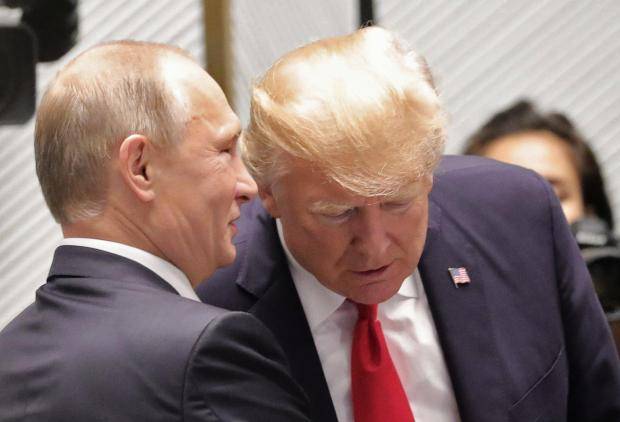 Folks, this is not a Blog we are proud of. In fact, it gives us chills just to think about it. But after you see the logic of our deduction, you will, also, realize that Donald Trump dumbest American President most likely we ever voted for.

The world knows by now that our airhead Donald Trump called Vladimir Putin to congratulate him for winning a rigged election in Russia. The call happened 48 hours after the elections.

Why would Trump call Putin when he is under scrutiny by a Special Counsel looking into Russian collusion with his 2016 campaign? What good would a call to an international polarizing figure does to promote Trump’s innocence? The Washington Post published an article whose title says it all “Trump’s national security advisers warned him not to congratulate Putin. He did it anyway.”

Trump called for one reason only. Not to show his innocence by showing the normal behavior of a sitting U.S. President. Not because he felt the personal urge to call his mentor-like figure. No, Trump called Putin to poke the eye of the intelligence community, which believes in Putin’s danger to our own security. This is the only reason Trump, the man-child, called Putin the barbarian. It was his way of saying to the FBI, CIA, NSA, DIA, and so many other agencies: F*** you!

Some may see his act as bravado. “Go get them Donald”, some of you might be screaming inside. But when you think about the reason, you cannot but come to the unquestionable conclusion, which is Donald Trump dumbest American President ever.

When he decided to poke the intel community, Donald Trump did not think what the consequences might be for the enemies of Vladimir Putin who may be skripaled at will. Trump did not consider what the British, who just suffered from a Putin nerve gas attack on their soil, might have to do to prevent another attack now that his call of support has reverbated around the world. How dumb is Donald trump? The dumbest U.S. President ever elected to office.

Furthermore, Trump did not consider what his call might cause with regard to the security of our allies. Putin, after all, is conducting a war against the Syrian people with Khamenei by his side. The same Khamenei that wants to annihilate the State of Israel. Just like a child, all Trump wanted to do was poke Special Counsel Robert Mueller and the intel community. Beyond this immature gesture, our airhead president did not think through what are the consequences of that call.

Trump supporters are dwindling in numbers judging by the special election in Pennsylvania that saw Connor Lamb, a Democrat, win it. To any reasonable Republican, impeaching Trump to safeguard the party’s hold on power, must now be considered seriously. It’s them or him.