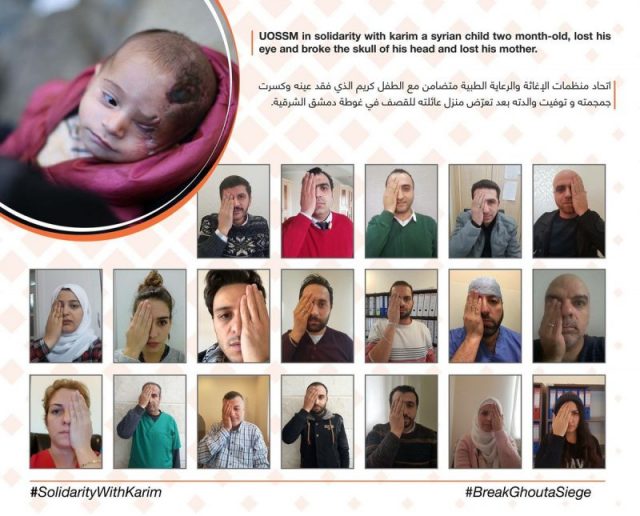 From One Syrian Infant to Trump the Infant: Stop Praising Putin

As Vladimir Putin bombs Syrian civilians, to include helpless women and children in Eastern Ghouta, one Syrian infant, named Karim Abdul Rahman, who lost his left eye to Assad’s bombing, became a symbol of the Syrian tragedy. A tragedy that is being perpetrated by the Assad regime backed by Khamenei and Putin. From one Syrian infant to Trump the infant: Stop praising Putin the mass murderer. The man bombs civilians and then his military carpets the area again to kill as many injured civilians as possible.

Karim has become a symbol of Assad’s butchery against his own people. Assad’s mass killing of civilians in the Damascus suburb of Eastern Ghouta is being aided and abetted by the Iranian regime of terror and Vladimir Putin. From one Syrian infant to Trump the infant: Stop praising Putin.

The Union of Medical care and Relief Organizations informed the world what happened to infant Karim:

He and his mother came under an artillery attack in a popular market in Hammuriah, Eastern Ghouta. Karim’s mother was killed in that attack, and Karim sustained severe injuries to his skull,

The injury Karim sustained, which is the result of Syria’s brutal civil war, has sparked a social media frenzy symbolized by two hashtags (#SolidarityWithKarim and #StandWithKarim) that has gone viral on Facebook and Twitter. People from all around the world to include diplomats, famous athletes, regular folks, and aid workers whose outrage over the world’s silence has spilled over in support of Karim. They all have been posting selfies with their own eye covered.

Since the Hitler and Stalin eras of mass killings, no other children around the world have suffered the intense and deliberate targeting like Syrian children have. From one Syrian infant to Trump the infant: Stop praising Putin.

British Ambassador to the U.N. Matthew Rycroft weighed-in with his support of Karim.

When we sit around the #UNSC & warn that inaction will mean more people are going to die. More schools bombed. More children scarred. This is what we mean.

We must see an end to the bombardment & siege of #EasternGhouta.#SolidarityWithKarim pic.twitter.com/8Io85VlDdF

So did Franck Ribéry, labeled the Jewel of French Football.

From One Syrian Infant to Trump the Infant: Stop Praising Putin