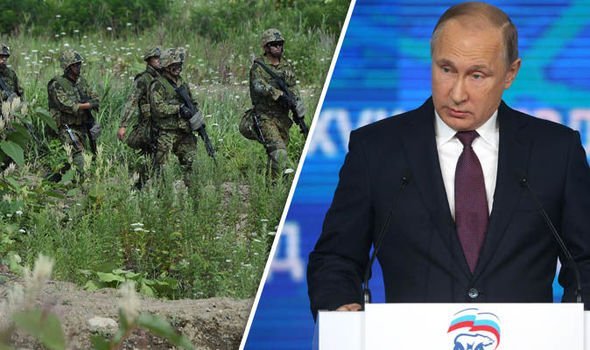 Pentagon War Against Russia Around the Corner

We believe Pentagon war against Russia is around the corner. The seeds have all been planted by Barack Obama.

Barack Obama believed that ignoring Vladimir Putin‘s invasion of Ukraine and Syria would set a precedent in U.S. foreign relations to simply ignore Russia all together in the future.

He also believed unleashing Iran in the region would solve two thorny issues he was adamantly against: Starting a new war in the Middle East and threatening Israel, a country he grew up to hate.

Both reasons, it is becoming clear every day, are faulty.

Israel and many Arab countries are preparing for a grand war against Iran no doubt the U.S. would join, and Putin is on a journey of bullying and threatening the U.S. still believing that Trump is just a friendlier Obama.

In Norway, which is now home to 300 U.S. Marines, General Robert Neller, in command of 200,000 brave U.S Marines, delivered a stark warning to Vladimir Putin.

Gen. Neller told the troops in Norway to be prepared for a “Big-ass fight“. He added:

I hope I’m wrong, but there’s a war coming… You’re in a fight here, an informational fight, a political fight, by your presence.

Later Gen. Neller made it even clearer by saying that the U.S. operational focus is now Russia. Norway shares approximately 250 kilometers of borders with Russia.

This is the first time Norway has played host to U.S. troops on its territory since World war II. The decision had an impact on Putin who delivered a stern warning that U.S. troops in Norway would harm U.S.-Russian relations.

In the meantime, what prompted Gen. Neller’s stark warning were all the activities Russian submarines were conducting in the Mediterranean.

The Pentagon is simply responding to Putin’s desire to continually poke and threaten the U.S. without considering the consequences of his actions (like stationing U.S. Marines on his borders). It won’t be long, if Putin continues to expand Russian sphere of influence to further threaten Europe and the Middle East, before one of his precious advanced fighter jet finds the bottom of the Mediterranean off the coast of Syria.

Pentagon War Against Russia Around the Corner

Loading...
Newer Post
From One Syrian Infant to Trump the Infant: Stop Praising Putin
Older Post
While Trump Praises Putin, The Thug is Preparing Another Attack