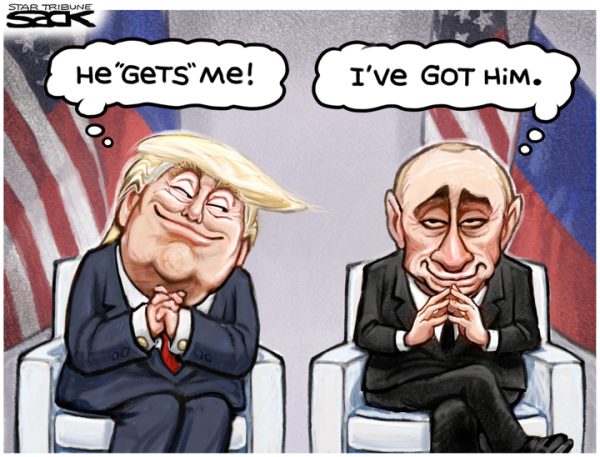 During an ill-advised call to Vladimir Putin to congratulate him on winning a rigged election in Russia, our President airhead Donald Trump suggested they should meet in the near future. Well, that near future is upon us today. Falafel learned that Trump Putin future meeting to Skripal Mueller was the real purpose.

Our President finds it hard to fire Robert Mueller because it may bring down the gauntlet on him from his own fellow Republicans and his own staff dwindling in numbers every day. Hell, we think his lawyers might resign as well to avoid fighting the world on behalf of their dumb client.

So, Trump developed a new plan on his own he discussed with no one. Trump Putin future meeting to Skripal Mueller is what he wanted.

Falafel’s “deep friend’ in the Kremlin arranged for him to hide under the large conference table in the Kremlin where Donald Trump, finally, got to meet Putin after his congratulatory phone call. This is what happened during that secret two-men meeting.

Don: Oh, dear Vlad. I cannot tell you how good it feels to be in the Kremlin. So secure and so protected from the prying eyes of our spy agencies in Washington.

Vlad: Welcome Mr. President to our humble den of wolves.

Don (leaning over as to whisper): I heard from a common friend that you are now worth $200 billion. Is that true?

Don: (Jumping happily in his seat): Oh, lordy. Tell me Vlad, how does it feel to be worth that much money?

Don (Laughing and clapping his hands): I knew it. I knew it.

Vlad: Mr. President, you asked to meet. What’s on your mind?

Don: Well, I did ask indeed. This is a very sensitive matter. Are you sure you are not recording this meeting? I mean I don’t mind recording my voice but not a video.

Vlad: Mr. President, please do not insult me. What gave you such ideas?

Don: Ok, Ok, I trust you. Paul Manafort told me you never lie.

Vlad: We Russians are men of honor. Videotaping an important guest at the Kremlin goes against our high ethical standards.

Don: You see Vlad, I am in a little of a pickle with the Robert Mueller investigation. The man is like a bull dog and he will eventually find out why I’m so scared of him.

Don: I thought maybe you can help me a bit.

Don: Well, I saw what you folks have done to Sergei Skripal in London and I was wondering if you could Skripal Mueller for me?

Vlad (Smiling wryly while looking over his shoulders at the corner ceiling of the room): Let me understand you well Mr. President. You want me to kill Robert Mueller by injecting him with a nerve gas using our spies in Washington DC?

Don: Yes. Is that going to be a problem?

Don: You name it. Anything really.

Vlad: First, if there is a new investigation, you fire the Special Counsel for lack of evidence.

Vlad: Second, you transport the agent back with you on Air Force One to avoid detection.

Don: Consider it done. I will tell Melania this is a new perfume she needs to keep close to her chest.

Vlad: Then you have a deal Mr. President. It will be done within a week of your arrival.

Don (Rises to shake Putin hands. Slaps him on his back before departing): I knew I could trust you.

After airhead Donald Trump leaves, Sergei Lavrov opens the door to the conference room and walks to putin.

Sergei: Who needs Christopher Steele? As of today, we own their idiot president.

Falafel left after both men departed. He felt nauseated as he drove to Sheremetyevo Moscow airport. This whole Trump Putin future meeting to Skripal Mueller was intended solely to save Trump’s skin. Falafel thought to himself: Donald trump is, without a doubt, a man that cannot be trusted at all.