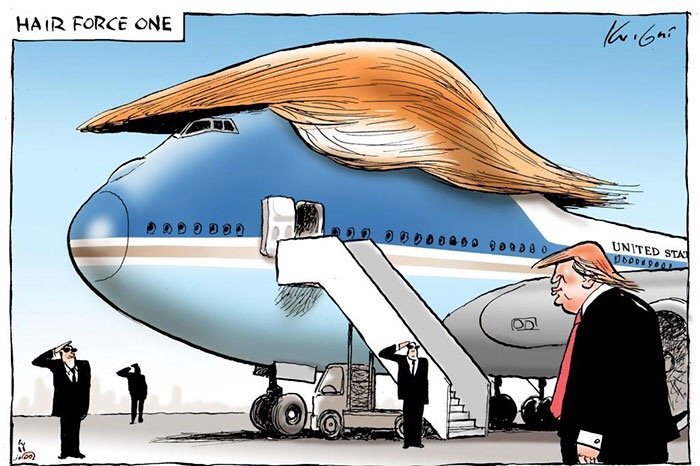 Falafel interview Donald Trump. It was inevitable, considering President Trump use of the White House bullhorn to mock and insults everyone.

It was inevitable, considering President Trump use of the White House bullhorn to fight back his detractors, that, Falafel, the Syrian-American super journalist and reporter, would interview him in search of the truth Trump believes the American people cannot handle. On a brisk winter day, Falafel interviews Donald Trump.

Falafel crossed the lawn of the White House for the surprise of his life.

Trump was already waiting for him with his iPhone in hand typing feverishly.

Falafel: Mr. President, thank you for seeing me on such a short notice. New interesting tweet?

Trump: Don’t want my base to misconstrue our interview, so I just tweeted that you are a bona fide U.S. citizen and not a Syrian refugee. You may want to keep your passport handy just in case my supporters try to run you over à la Charlottesville.

Falafel: Not worried at all Mr. President. My shield is our Constitution. Shall we start?

Trump: You know the rules, right? You can’t ask any question I don’t like.

Falafel: Yes, I am aware. My first question is the following: Why do you mock and insult people who don’t like you?

Trump: I am going to allow this question because I like the answer. An advisor told me once that during the Soviet Union era if the Kremlin could not kill you, the Soviet hierarchy mocked you to diminish your stature. I follow the same mantra. I insult them to make them look small and insignificant. It kills them that I can do it.

Falafel: What if someone reciprocated by mocking you?

Trump: The media does that all the time. The Fake News label came about to discredit their mocking.

Falafel: No other U.S. president in history has amassed so many enemies in such a short period of time. Whether the intel community, Congress on both sides, the media, and lately the sports industry. Does it not worry you that powerful people are all gunning for you?

Falafel: What happens if the Democrats impeach you?

Trump: Based on what? The Steele Report? Anyway, if impeached, I cannot, under the Constitution, be indicted of any crime.

Trump: Unpopularity of our politicians. Our Congress looks more like a monarchy than representatives of a Republic. Some have been there for over forty years.

Trump: Two-term limits. Only they can vote for that one. As long as they don’t, I believe the American people are going to vote for outsiders in the hope Congress gets the message.

Falafel: Did they get it with your election?

Trump: Not the least. All the scandals swirling around in DC are contrived for one reason. To get the public’s attention elsewhere. Congress thinks it can survive their unpopularity by creating more unpopularity elsewhere. Typical bait and switch operation invented by the Soviets. Collusion, my ass!

Falafel: Who is behind these scandals? Pelosi? Schumer?

Trump: Barack Obama. He is a real snake that one. Play all nice and polite in public but his venom sprays like water sprays in a car wash.

Falafel: Wasn’t that Hillary paid for the Steel Report?

Trump: The idea was concocted by Barack Obama. I know that for sure.

Falafel: How come your response to his conspiratorial goals has been timid?

Falafel: Why wait for his book?

Trump: To catch him red-handed with his lies and deceptions. It will help the Special Prosecutor.

Falafel: Special Prosecutor? Are you going for the jugular Mr. President?

Trump: I’m going to make sure no one like Barack Obama ever get elected again. Let the people see him for the evil person that he is. He made every American look weak and helpless because of his Iran Deal.

Falafel walked away feeling the President made sense. He had a good plan to out the conspirators and prosecute those who broke the law.