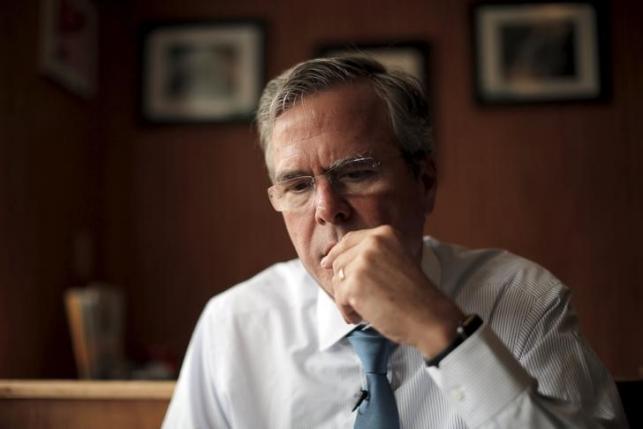 Republican Jeb Bush vowed on Tuesday to take a more aggressive approach to countering Russia if he is elected president next year, calling Vladimir Putin an “agile adversary” who is exploiting a vacuum of U.S. leadership in Syria and elsewhere.

In an interview with Reuters, Bush said that if elected in 2016 he would seek to build a coalition of European and Arab partners to work for the ouster of Syria’s psychopath Baschar al-Assad, which he said is key to resolving the festering conflict and a worsening refugee crisis.

Calling Putin a “bully”, Bush said the United States and Europe should also extend sanctions against Moscow over its military aggression in Ukraine that are set to expire at year’s end. Jeb Bush says Putin’s Russia should face consequences over Syria’s invasion.

“How to deal with him is to confront him on his terms, not to create a more bellicose environment but to simply say that there is going to be a consequence,” Bush said in the interview, in which he also called for a tougher stance against China and to counter growing Iranian and Russian influence in Iraq.

Russia’s sudden step-up of military intervention since last month in support of Assad has raised questions about U.S. influence in the region and cast doubt on Obama’s strategy, which has mostly steered clear of confronting Assad militarily.

With a raft of policy proposals, Bush has sought to position himself as the most substantive candidate on foreign policy, drawing a contrast with “outsider” candidates like Donald Trump, Carly Fiorina and Ben Carson who have never held elected office.

Bush’s approach to coalition-building over Syria carries echoes of the coalition his father, then-President George H.W. Bush, built in 1991 to respond to Iraq’s invasion of Kuwait. He said he would create a no-fly zone to protect Syrian refugees and allow for training of Syrian rebels, an effort that has mostly collapsed under President Barack Obama.

Obama has resisted the creation of a no-fly zone and has not stepped in to protect Syrian rebels now under attack by Syrian government forces backed by Iranian troops and Russian warplanes. He has said Russia is acting out of weakness and warned Moscow it would get sucked into “quagmire” in Syria.

“You see the potential now for a unified approach against both Assad and ISIS,” Bush said, referring to the Islamic State militant group that controls swathes of Syria and Iraq. “If we do nothing, we’re basically saying goodbye to the Middle East.”

He also said he would make sure the United States continues to confront Islamic State in Iraq and bolster the national government there amid signs that Russia and Iran are exerting growing influence in the country.

“There are a lot of sanctions that have nothing to do with the nuclear deal that can be reinforced,” he said, referring to the landmark agreement between major powers and Tehran in July.

Bush, who earlier this year was the heavy favorite for the 2016 Republican presidential nomination but is now fighting to rise in the polls, made clear he feels that Senator Marco Rubio, a competitor with Bush for the establishment Republican wing, does not have enough experience.

“Marco is a great guy but he hasn’t had the record I’ve had in developing strategies, applying conservative principles, disrupting the old order, sticking with it, moving the needle in terms of progress for the American people,” he said.