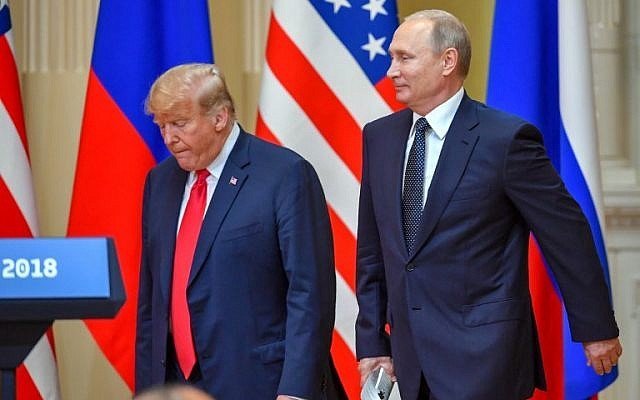 The traitor Trump shameful Helsinki Summit will go down in history alongside Pearl Harbor and 9/11 for its disastrous outcome.

The President of the United States, Donald Trump, met with Vladimir Putin in Helsinki on Monday; and with a flip of a switch turned off the lights on John Winthrop’s shining city on the hill.

Donald, like John, finds more common ground in totalitarian violent regimes than the spirit of America and its institutions. In Helsinki, we saw Donald for what he is: A shameful President who fears and admires, simultaneously, the violent regimes of our enemies and belittles the shining American institutions that brought him to power.

Trump, for all his past mistakes, just made the biggest in his life when he attacked America while standing next to our worst enemy. He will always be mocked and ridiculed by future America as a man who would have found home more in a mental institution than the White House.

The outrage that followed traitor Trump shameful Helsinki Summit with his total submission to Vladimir Putin was quick to develop. One Senator after another, and one intel official after another felt the need to denounce this coward of a President. If only the morons who voted for Trump could just explain to the rest of us what justification they have to support this traitor in the White House.

Make America Great Again … by ass kissing Putin and kicking our institutions in the balls. That’s the Helsinki Summit in brief.

Trump is a coward and a traitor who should be impeached at once. He went too far this time around, and Congress needs to match his rhetoric with its action to rid America of this sick cowardly man who could not stand up and defend his own country from a savage like Putin in front of billions of people.

It is time America relegated Trump to the scum bins of history where he belongs. Enough is enough. Americans felt belittled during the Obama era because of his wimpy demeanor, but traitor Trump shameful Helsinki Summit is making us all feel humiliated to be Americans. It feels like all Americans are kneeling before Putin with Trump’s coaching us to submit to Putin’s barbarism.

Considering the fire storm his words managed to create, Trump tried to backtrack by saying he misspoke. He tried to explain that he said “would” instead of and “would not”. Never mind he could have corrected such simple mistake on the spot.

Maybe Americans should backtrack by saying no more Trump in the White House.

Is it possible Putin has a video of Trump sleeping with a child prostitute while in Moscow in 2013, which explains Trump’s ingratiating behavior?