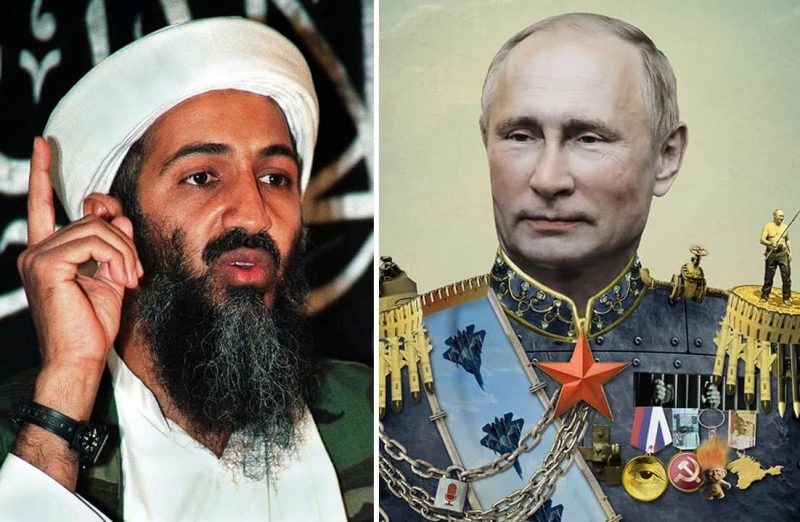 While America was distracted by ISIS that Assad, through sheer terror against Syrians, fostered, Vladimir Putin sneaked through the backdoor to cyber attack our democracy. Vladimir Putin is the new Osama Bin Laden and Obama’s Syria policy started it all.

What sparked the Arab Spring, after all, were the intentional economic deprivations the Arab youths despised; but religion hijacks it under the approving nods of the corrupt Arab rulers. The more Islamist political orders manifest themselves, the more America pours cement over the concept of an Arab strongman acting to deprive and oppress the Arab street. The United States is backing an Arab Inquisition of sort when it supports these Arab oppressive rulers.

Which brings us to 9/11 and the rise of the likes of Osama Bin Laden. Why Bin Laden attacked the United States remains a mystery to many. For those in the know among our security apparatuses, they will tell you that it is the combination of the two items above. Occupation of Muslim lands — in the form of U.S military bases — and support of corrupt Arab rulers.

We tend to think it is more the latter. Saudi Arabia’s Mohammad bin Salman killed and dismembered a Washington Post journalist and our president heaped praise upon this insignificant in-bred.

While Islamic terror has been at the front and center of America’s foreign policy, we neglected to safeguard our cyber infrastructure. Had it not been for Donald Trump winning the elections with help from Putin, our cyber policies would still be dwelling in some cave. America is wide awake now. Our priority should be defending against Russian cyber attacks, as well as undermining Vladimir Putin to depose him.

To do so, the United States must view Vladimir Putin the way it viewed Osama Bin Laden. Both have attacked the US using differing methods, and both are staunch enemies of our democratic process. In our opinion, Vladimir Putin is the new Osama Bin Laden. Unless we equate this pair to each other, we will always be vulnerable in the future.

His rise is a clear and present danger to our democracy.