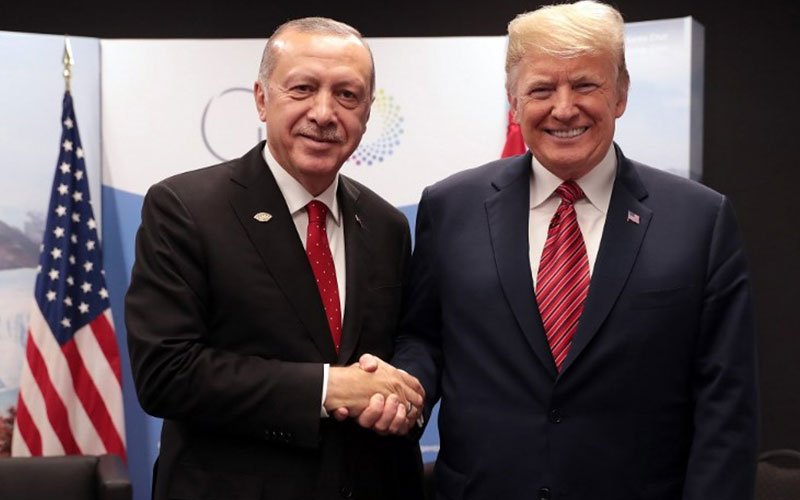 Trump Needs to Partner With Turkey in an Election Year

March 1, 2020 6:18 am 0
Iran seizes US Navy boats and crew
Mousavi Compares Khamenei to the Shah of Iran
Drone bomb IRGC and Hezbollah in Syria

America’s enemies have discovered that, under certain circumstances, American interests are sitting ducks during presidential elections. This year, in particular, will see the United States lose big in the Middle East and possibly Europe as the Syrian-Iranian-Russian axis find ways to make gains in the region knowing well that the incumbent President in the White House is unlikely to defend militarily U.S. interests. As such, President Trump needs to partner with Turkey in an election year to defend American interests. But will he do it given his Putin’s love fest or Israeli opposition to the Islamist Erdogan?

It has already started. The axis of evil is on the move in Syria. This makes Turkey, a NATO member, an important ally for President Donald Trump. Turkey can defend those interests only if the right people dictate the right policies back in Washington. However, given Turkish Islamic inclinations as the defender of the Muslim Brotherhood order, this will be an unlikely scenario. Asking Islamists to stand-in for the United States in its fight against the axis of evil may very well be the lesser evil. Because once Russia and Iran gain a foothold, kiss your interests goodbye.

At TFS, we don’t see anyone in President Trump’s inner circle whisper in his ears how important is Turkey’s avant-guarde help might be until the November elections. One might be able to convince him of the lesser evil theory is Senator Lindsay Graham. The Senator has already called for a no-fly zone over Idlib, which is the correct right move. Freezing the Assad regime and Russian air power may freeze the whole axis.

Should President Trump fail to act on Senator Graham’s call, Russia will occupy all of Syria as well as push Turkey to flood Europe with a new wave of Syrian refugees to prepare its far-right parties to take over in their respective election cycles. Two birds, one stone.

But will Donald Trump act against Vladimir Putin by stopping him, or will he just let him lose in the hope he can build his Trump Tower in Moscow? Since the Senate has yielded its constitutional powers to this president, Trump may choose to ignore all warnings to include partnering with Turkey. A big part of Trump’s consciousnesses relies on protecting his business interests first, country second.

TRUMP NEEDS TO PARTNER WITH TURKEY

So far, the President has been mostly silent on Idlib. With the exception of a statement our Ambassador to the United Nations, Kelly Craft, made two days ago affirming the President’s wish for Turkey to de-escalate, it seems the United States is taking a neutral stand. At least publicly. It is encouraging, though, that Ambassadors Craft and James Jeffries, our U.S. Special Representative for Syria, have left to Turkey today for a two-day visit. The timing could not be better considering the military escalation we witnessed the last few days.

They may have Trump’s ear if the two Ambassadors can extract some understanding of Turkish long-term goals in Syria. Whatever the case, the west must stand by Turkey for stepping-up to the plate to stop Assad terror when Brussels has recoiled from offering a military solution to the Syrian tragedy and Washington is incapable of an election-year intervention to end Vladimir Putin’s push for a Soviet-style occupation power. The west has no choice. A 10-year old can see this chessboard next move.

The question Europe must ask is: Which is more dangerous to the west? A Turkish Islamist victory in Syria to halt immigration, or Vladimir Putin to have some levers of control over Europe without firing a bullet?

The question the United States must ask is: Can we live with a Mexican stand-off between Assad and the Muslim Brotherhood in Syria, or do we yield to Russia gaining a foothold in Europe and Putin outselling his military hardware to traditional U.S. customers?

Any other question is really irrelevant.

As for the 30,000 AQ fighters in Idlib? Let the United States handle this problem like it handled the Islamic State problem. Without targeting and killing Syrian civilians, or causing an exodus of gargantuan proportions.

Having said that, a U.S. No-Fly Zone over Syria is the panacea to solve it all for a starter. It’s nine years late, but, oh so urgently needed today.

See what the policies of Barack Obama led us into?

Trump Needs to Partner With Turkey in an Election Year