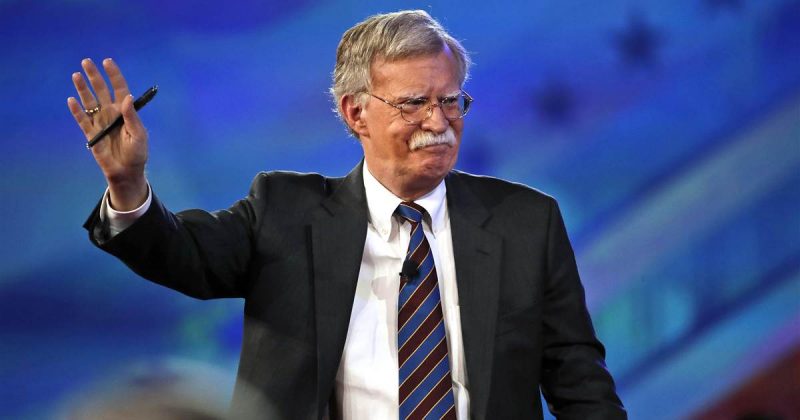 If you were a fly in one of Khamenei’s many opulent palaces, you could witness this terrorist piss blood upon hearing that John Bolton has been appointed as the new National Security Adviser to replace the more timid, Obama-like H.R. McMaster. With John Bolton’s appointment, kiss Iranian Mullahs goodbye.

No other person scares the Mullahs the way John Bolton does and truthfully, it is about time. Those bastards have been spilling blood all around them for close to forty years. It is time someone with courage and determination comes along to make them pay for their deeds.

He will first tear the NSC staff and hire his own people instead of the Obama holdovers McMaster could never find the courage to show the door. His second act will most likely be to tear the Iran Deal apart by stating the obvious that the Mullahs cannot be trusted to have a nuclear weapon of any kind. Not now, and not in the near future. His third act would be to go for the jugular by dusting-off whatever plans H. R. McMaster and his predecessors shelved in their drawers to change the Iranian regime.

In our humble opinion, John Bolton will not rest before those evil Mullahs are shown an exit door worthy of their bloodthirst. He will not rest until he sees the people of Iran in full control of their liberal and secular destiny. Bolton will be like the bulldog the Mullahs wished they never had to meet.

While many think Iran is calming down, stories from inside speak to the contrary. The people are revolting in their own ways. One example shows the people turn their back on their Mullah speaker in the Mosque and chanting “Our Freedom is ahead, our enemies are to our back”.

Iran is ripe for a grand revolution to remove those bastard Mullahs forever, and with John Bolton’s appointment, kiss Iranian Mullahs goodbye.

The IRGC, feeling the squeeze, is jockeying to be the Mullahs’ replacement. Imagine that. Their leaders are telling the people that they could offer a Hijab-free and secular Iran. The IRGC thinks what it has done in Syria, Yemen, Lebanon, and Iraq could be forgotten by the good people of Iran. The IRGC thinks its pilfering of the Iranian economy could be sidestepped.

Bolton will come hard on Hezbollah for sure. What measures he will propose to the President will be tough enough to clip its wings. Anyway, if the Mullahs go, so will Hezbollah. Good riddance for all.

As for Syria, we are not sure yet. Bolton may choose to weaken Assad by removing his wingmen (i.e. Iran, Hezbollah) to force him out in an orderly fashion, or he may choose to strike Assad in spite of Trump’s lovefest with Putin, or he may simply ignore him and his crimes. We don’t know yet. Wait-and-see is our best prediction.

We hope John Bolton is the Obama antidote we all have been waiting for since 2008.