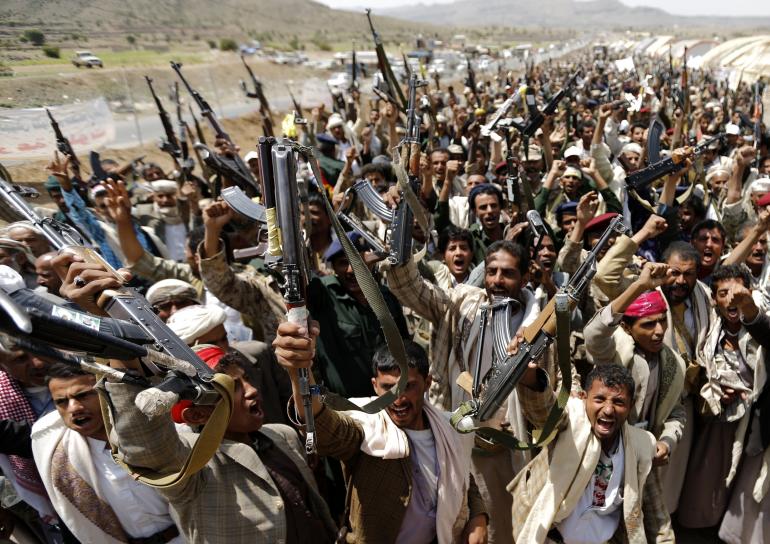 April 22, 2015 6:12 am 0
GCC Widen Sanctions Against Hezbollah
15 Children from Daraa Saved the GCC Countries
Arab League, Stand up to Obama

No one can argue with the knowledge that Iranian foreign policy rests on two premises. Sow chaos, and do it using proxies.

Whether in Lebanon where Iran has been funding Hezbollah terror since the early eighties, or Iraq where it funds the Shia militias to include the Mahdi army. or their latest foray into Yemen where Iran has been arming and funding the Houthis to destabilize the country, Iran is all about chaos and destabilization.

Why does Iran seek to destabilize the region using proxy violence? Are the Iranian Mullahs sowing chaos and operating in this manner as a short-term tactic or a long-term strategy? Are the Iranian Mullahs sowing chaos a mean to an end or an end in and by itself? Considering they believe in the rise of the 12th Imam only through Armageddon, answering this question also answers why Iran will never cease to pursue nuclear weapons. This quest is carved in its theocratic DNA, and the mean to achieve it, through chaos and violence, is more than a tactic. It is Iran’s national signature the way freedom is America’s national signature.

Why would a country on the path of violence, it considers normal, be permitted to be relieved of sanctions? Why would the Iranian Mullahs sowing chaos get paid the sum of $50 billion just to sign a meaningless deal its leaders have no intention of honoring? Honestly, the U.S. diplomats behind this ‘signing bonus’ idea are total idiots.

Paying Iran $50 billion as a ‘signing bonus’ when the Iranian Mullahs are destabilizing and sowing chaos is absolutely idiotic. Many of these billions would go to Assad for his barrel bombs and chlorine gas attacks. In a way, the U.S. State Department would be feeding the Syrian civil war and allowing Assad to gas and kill civilians with the funds the Mullahs receive as a reward from the U.S.

Pretending otherwise is unbelievable. The Iranian Mullahs sowing chaos may get $50 billion to threaten, terrorize, and kill even more. Call it Obama’s gift to the Arab Gulf countries and Israel.

Just because there is no strong lobby in the U.S. that could speak for the Syrian people does not mean we should let the U.S. State Department trample upon the lives of Syrians and Arabs in general  with their foolish and impractical ideas.

If the U.S. State Department pays Iran $50 billion, the diplomats behind this idea might as well drop the chlorine gas on Syrian civilians because the effect is one and the same.