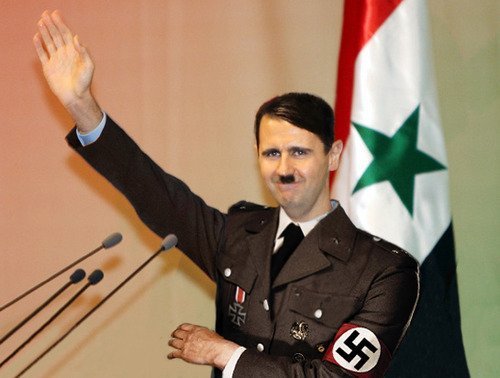 August 28, 2016 10:52 am 0
ISIS Excuse Fosters Syrian Occupation and Oppression
ISIS edges towards the heart of Damascus
Defeated ISIS Will Regroup Due to Short-Sighted U.S. Policy

It was inevitable, now that the President of the United States Barack Obama averted Syrian catastrophe, that Falafel, the Syrian super journalist, would eventually be granted an interview to promote the president’s words to the Syrian people and the Arab world.

Falafel: Mr. President, as you well know we will be talking about Syria today. So, my first question is: How do you feel about having played a central role in saving the Syrian people from the onslaught of the Assad regime? In fact, Obama averted Syrian catastrophe?

Obama: It feels right. Assad fully understands that I have red lines no one should cross when it comes to crimes against humanity. I personally pride myself on the success of this policy.

Falafel: A prominent American journalist wrote the other day that had it not been for your prescient brilliance with regard to Syria, the country would have fallen into a ravaging war where Iran and Hezbollah would have played an important role by dispatching their troops to Syria.

Obama: Then you can say I earned my Nobel Peace Prize (Smiling). You can certainly quote me on that.

Falafel: Another journalist said that had it not been for your interference in Syria on behalf of the moderate rebels in 2011, extremism would have risen to levels that would have endangered the western world. He said that you, Mr. President, because of your quick action in Syria, you blocked the rise of an extremist organization very few people heard of called ISIL or ISIS.

Obama: I did read the article and I have to admit I did not know who or what ISIL was. I am glad my actions in Syria saved the Homeland and Europe much unnecessary forced immigration caused by the Assad and ISIL terrors.

Falafel: What about Iran Mr. President? Are you not afraid the Mullahs might retaliate for standing up to their man in Damascus?

Obama: Iran does not matter really. It is a weak country. Incidentally, should we get a whiff of any planned proxy terror attacks by Iran against the U.S. or any western interest, I will personally press the drone button to blow up Khamenei’s home in Tehran the way President Reagan bombed Qaddafi’s palatial tent, which stopped him cold from terrorizing the region. Fear not our resolve to respond to fire with the fires of hell. Just like the Israelis have successfully done against Those Iranian Mullahs in the region.

Falafel: Another journalist wrote that had it not been for your courage in Syria to turn the country against Iran and Hezbollah, Russia might have come to the aid of Assad, which would have wiped out 50 years of building our presence in the region. What do you say to that?

Obama: Putin is too smart to test me. That’s what I think.

Falafel: What do you say to those who claim that we are losing the hearts and minds of the people in the Middle East with our strong-arm tactics instead of Obama averted Syrian catastrophe?.

Obama: We have an enemy we must defeat called Islamic extremism and terror. The day the more moderate elements of Muslims of the region understand that we will not stop until we defeat this enemy is the day they would come to realize they have no choice but to cooperate with us. We cannot abrogate our responsibility towards our people in America, our allies in Europe, and our friends in the region. Let this be a warning to all those who take-up arms against our American interests and those of our allies: We will find you and we will stop you.

Falafel: Well said, Mr. President. Do you have a strategy to eradicate Islamic terror?

Obama: Glad you asked that question. We have several military and economic strategies in place. If you are a state-sponsor of terror, like Iran, we will choke you economically until the people rise against you. If you are a terror organization, we will bomb you until there is not one structure standing you can hide under. We are determined to win this battle no matter the circumstances.

Falafel: Mr. President, these are strong words from the commander-in-chief.

Obama: Upon taking my Oath of Office, I remember vividly saying that “I do solemnly swear that I will faithfully execute the Office of President of the United States, and will to the best of my Ability, preserve, protect and defend the Constitution of the United States.” By defeating our enemies abroad, I am ‘defending and protecting’ the U.S. Constitution at home. Otherwise, we might as well all carry the Koran and our women wear a Hijab imposed by extremist Islamic ideologies.

Falafel: Who is the best person to go to when it comes to the strategies to defeating Islamic extremism? We all know you fired Valerie Jarrett and Ben Rhodes the moment they proposed something called the Iran Deal. Who is your go-to guy or gal today?

Obama: I trust one man only and his name is John Bolton. He has been giving me sound advice, which is why today we do not have to worry about Assad or Iranian terror or organizations like… What was its name?

Obama: John Bolton has the wherewithal and the courage to help defeat our enemies. I trust him completely. You ought to read his book “How Barack Obama is Endangering our National Sovereignty“in which he argues about my bold strategies to defeat terror. Very good read.

Falafel exited the White House knowing well that Barack Obama is the man to stop and defeat Islamic fundamentalism. Furthermore, he will always be remembered as Obama averted Syrian catastrophe kind of president and along the way saved the Syrian people from the Assad and Iranian terror machines.