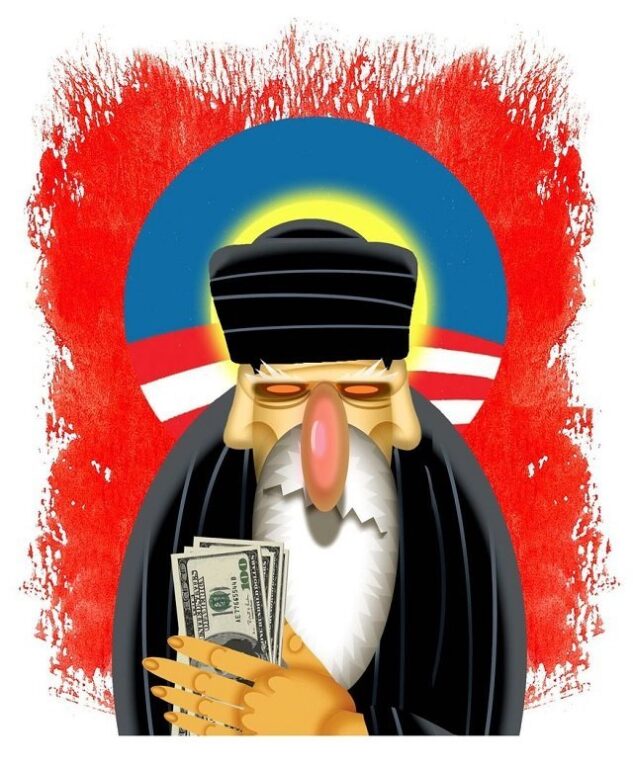 January 14, 2016 2:41 pm 0
The Mullahs Thank Mr Obama
No Choice But To Mobilize Against the Mullahs in Iran
Iranium Mullahs Discover Reserves of Uranium

Since 1979, the Khomeiniist regime in Iran has pressed the United States, to release $146 billion in frozen assets that legitimately belongs to the people of Iran. Four presidents refused to succumb to Tehran’s demands and did not hand over the assets. However, President Obama, who has been angling for a foreign policy accomplishment, has agreed, and will shortly release those funds back to the Islamic regime.

Though he was fully aware of the fact that sanctions had practically bankrupted the Islamic regime brass, Mr. Obama suspiciously chose to hand over the assets. The president knew that the populist uprisings that followed the 2009 faux election and additional sanctions will simply put an end to their dictatorial rule, and yet he inexplicably put the kibosh on both of those real scenarios.

It may sound simplistic but with more than two years wasted on negotiations with the Islamic regime, the United States could have, once and for all, put a halt to the nuclear threat by supporting the Iranian people’s Green Movement and a nonviolent transition to a peaceful democracy in Iran.

There must be a reason for the president to willfully ignore a known international terrorist regime’s modus operandi. Mr. Obama turned his back on the Iranian people, who in 2009 spontaneously rose up against the three-decade-long Islamist tyranny. Even their clear calls to the president for help went unanswered, when they repeatedly chanted: “Obama, Obama, are you with them or with us?” Mr. Obama stood at his podium in the White House and in no uncertain terms, announced: “We do not interfere in Iran’s internal affairs.”

Supreme Leader Ali Khamenei’s motive for the “deal” that he has not even signed is at best questionable, and one wonders if the nukes and the antics of the P5+1 powers were nothing more than a hoax for another more important gain. The Iranian people have continually protested against the Khomeiniist regime, and have clearly demanded that the mullahs return to their mosques in order for a secular democracy that they have been fighting for to take hold. The mullahs are fearful that Western powers will betray them and orchestrate their removal from power, as in the case of Moammar Gadhafi in Libya, Hosni Mubarak in Egypt, and Zine El Abidine Ben Ali in Tunisia.

The steadfast determination and effort that Mr. Obama has shown in not only supporting but empowering the mullahs of Iran has been shocking, to say the least. The president who has been touted as an intellectual and humanitarian knows full well that the mullahs are simply put, ideologues of political Islam, a tyrannical, misogynists anti-West cabal that do not capitulate. He also knows that Hassan Rouhani and his cronies have no power and that the assets that legitimately belong to the people of Iran will be spent on short-, medium- and long-range missiles, rockets, military equipment, crowd-control gear and anything that will help to continue their nuclear program. Not much of the $146 billion will go to the economy of Iran, schools for children, jobs for the 46 percent of jobless youth and the welfare of the nation in general.