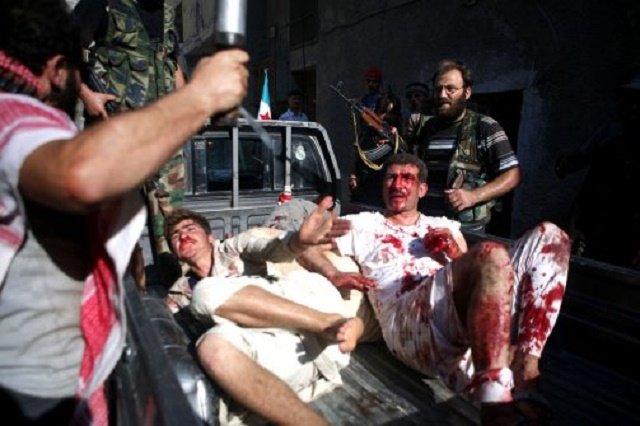 Why the Alawites of Syria Will Cease to Exist

June 14, 2016 4:58 am 0
World yawns as Syria enters the dark ages
Assad made beggars out of his people
How much the world hates Obama

Source: The Daily Caller – by Farid Ghadry (Why the Alawites of Syria Will Cease to Exist)

These documents show in vivid color the atrocities the Alawite Assad regime is committing against civilian Sunnis by gassing them, starving them, raping them, and barrel bombing them to the tune of 500,000 dead in the short span of five years. Most of the methods the Assad regime is using against civilians were used by Sultan Murad II upon his siege of the 30,000 inhabitants of Constantinople in 1422, which eventually led to its fall in 1453.

In the Arab world, there are 350 million Sunnis and 2 million Alawites. And if history is our compass, the crimes against humanity the Alawite Assadist regime is committing will not be forgotten by the Sunnis for hundreds of years the same way the Orthodox Church, which is fully backing Assad and his killing methods, has not forgotten how their capital Constantinople fell to the Sunni Ottomans who renamed it Istanbul. Why the Alawites of Syria Will Cease to Exist.

This begs the question of how long it will take before the Alawites are overwhelmed by the cheer numbers of angry Sunnis as their community faces extinction and they find themselves surrounded from all sides by their nemesis many of whom are foreigners reaching Syria from some 100 different countries. Anyone who thinks the Alawites are safe just because Russia and Iran back them ought to read about the suicide attacks carried out by extremists against Alawite civilians in Latakia and Jableh some two weeks ago. Since the beginning of the war, 37 such attacks have taken place causing thousands of dead and many tens of thousands fleeing for the safety of the west.

Unlike the Israelis, who have been besieged for close to 70 years by the Arab Sunnis, the Alawites lack the discipline, the knowhow, and the temperament to protect themselves from the coming onslaught. The Alawites are very good at killing because they have been trained for this eventuality (Watch this video of young Alawite girls chewing on live snakes during a military parade), but they are defunct when it comes to building a mini, self-reliant state able to protect itself through knowledge, acumen, and diplomacy the way the Israelis have. Furthermore, you can buy an Alawite guard at a checkpoint for few hundred dollars to terrorize the Alawite civilians; just try to buy an IDF soldier to see what might happen to you. Alawite nationalism is non-existent because of the in-your-face corruption and cronyism that has been practiced carelessly by their leaders for decades.

Even if the Alawites succeed in creating a mini state, Sunnis will keep coming until they all either die or emigrate. Sunnis will never forget what the Alawite Assadists and the Orthodox Church has done to their women and children in Syria. Just like the Jews have never forgotten what Hitler has done to them during WWII. Unlike the Jews though whose response to Nazism was narrowly limited to those mass murderers who had a direct responsibility for gassing their women and children, Sunnis will take a shotgun approach to avenge their dead. Every Alawite is guilty just for being an Alawite.

Long after Syria’s war is over, the acts of revenge will continue on both sides to the point where it becomes a numbers game the Sunnis are far better equipped at wining because of their massive population in the region. The Alawite fighting machine has been depleted to the point where mercenaries from Afghanistan and Pakistan have taken their place or they have been relegated to the small republican guard force left to protect Damascus. There is a reason why Hezbollah terrorists are dying in big numbers in Syria.

I predict a dire end to the Alawites of Syria. They will eventually cease to exist because their stupid leaders could not find the courage to share power with everyday Syrians who had nothing to do with religious extremists and fundamentalists. It would have averted the atrocious killing now carved in the shameful history of the Alawite Assadists and would have saved Syria from its total destruction.

Why the Alawites of Syria Will Cease to Exist