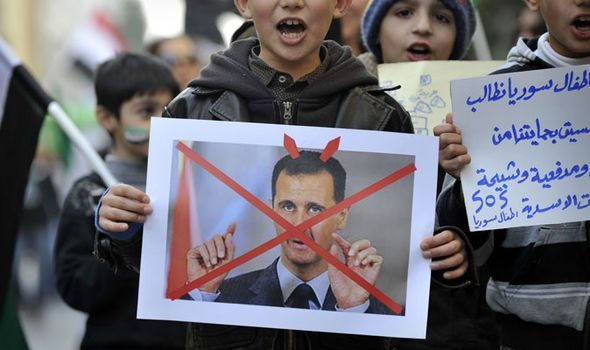 There is a new Syria policy to dismantle Assad dynasty and its many branches of terror.

Jim Jeffrey, the U.S. special representative for Syria, told Reuters that the United States will pursue “a strategy of isolation,” including sanctions, with its allies if Assad holds up a political process aimed at ending Syria’s seven-year war.

Jeffrey added that Washington would work with countries in Europe, Asia and the Middle East to impose tough international sanctions if Assad’s government failed to cooperate on rewriting the Syrian constitution as a prelude to new elections TFS hopes will be based on real popularity than fake inheritance. On peaceful co-existence rather than death and violence.

Ambassador Jeffrey had some harsh words against the regime and its allies in spelling what looks like a new Syria policy:

If the regime does that [holds up the political process] we believe that then we can go after it the way we went after Iran before 2015 – with really tough international sanctions. Even if the U.N. Security Council won’t pass them we will just do it through the European Union. We will do it through our Asian allies, and then we will make it our business to make life as miserable as possible for that flopping cadaver of a regime and let the Russians and Iranians, who made this mess, get out of it.

This spells like a new Syria policy to dismantle Assad dynasty in favor of a political solution that welcomes and protects all Syrians equally.

Reconstruction Funds After Assad, Not Before

Assad’s allies Russia and Iran, as well as China, have made some investments in the country. They cannot, however, afford the cost of rebuilding and want other countries to share the burden.

Western countries have said they will not approve reconstruction funding for Syria, or drop sanctions, without a political settlement. U.S. sanctions are already making it hard for foreign companies to do any business in Syria. Vladimir Putin, for his part, tried to twist the EU’s arms to fund but ended with a big failure.

Jeffrey has been charged by U.S. Secretary of State Mike Pompeo to oversee Washington’s role in a political process. All this while a U.S.-led coalition cleans up the last remaining Islamic State militants.

During the Barack Obama years, Jeffrey’s counterpart was Robert Malley who saw to the well-being of the Assad regime. Its tentacles of terror remained whole and slashing.

Thank you to President Donald Trump for this new Syria policy to dismantle Assad dynasty of terror.