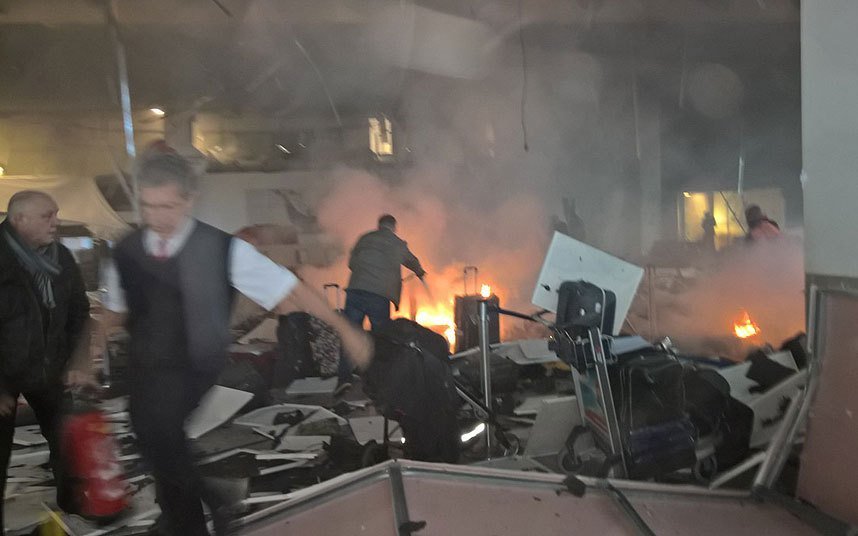 March 22, 2016 11:41 am 0
Syria’s Plan to Give Up its Chemical Weapons Could Make Things Worse, Not Better
Massacre at a Bakery in Aleppo
Help the Iranian Opposition

Had Barack Obama been a student of physics, he would have known about Newton’s Third Law of Motion, which tells us that “For every action, there is an equal and opposite reaction“. For Obama’s Iran Deal empowering Shiite Iranian terror in Sunni Arab Syria, the equal and opposite reaction is today’s Sunni terror reacting against the West. Blame Brussels terror attacks on Obama’s incoherent Syria policy, which ignored, and even ignited, the terror of Assad and Hezbollah backed by their terror masters in Tehran.

In his long interview in The Atlantic, Obama said that his “proudest moment” was when he pedaled back on the self-imposed Red Line to punish the Assad regime for its sarin gas attacks against innocent civilians. Since then, there have been over 160 more gas attacks mostly carried out by the Assad regime against Sunni women and children. Because of Obama’s silence on the matter to please the terrorists in Tehran, other than the victims, those in the know number in the hundreds mostly western silent spectators to Assad atrocities many radical Sunnis view as accomplices in his crimes. Obama’s Red Line is coming home to roost in the form of terror attacks against western civilian targets.

Many do not want to hear this truth because it does not meet the criteria to serve their agenda. Barack Obama’s supporters will tune out disgusted their man is still the target of much chicanery. Iranian supporters in the West will refuse to look at the facts, and Sunni haters will remind us of either 9/11 or some other historic event to deflect from the Shiite Iranian terror that has become the reason why the Middle East is burning with so much anger. Should we remind our readers that had Barack Obama supported the liberal and secular Free Syrian Army defectors in 2011 with sophisticated weapons to remove the Assad regime, Newton’s Third Law, ISIS, would have never existed. Instead, Obama was too concerned about signing a deal with Iran that unleashed dozens of terror genies from their bottles.

Sadly, we come to Brussels today as we, as sadly, visited Paris few months ago. The Iran Deal is sealed, which pretty much gives Iran a free hand to terrorize Sunni Arab countries, and the radical Sunnis are reacting to the deal. Blame Brussels terror attacks on Obama’s incoherent Syria policy, which ignored Shiite terror against Sunnis Iran has managed to kill half a million of them in five years. This is besides ethnically cleansing ten times that number. When every Arab ruler as well as many western leaders, to include Benjamin Netanyahu of Israel, voiced their concerns to the Obama Administration about his Iran Deal, they were brushed off by Obama and his national security staff many, regrettably, we would not hire as Baristas at Starbucks.

Here at TFS, we warned against the Iran Deal on many occasions. We also predicted that ISIS would simply not go away because it is a reaction to an action physics tell us conclusively we cannot kill as long as Iran terrorizes. We do not expect any of the P5+1 to admit their mistakes, and we certainly do not expect Barack Obama to admit any mistake of any kind. Collectively, they launched Sunni terror when they all ignored the Assad/Hezbollah/Iranian terror against Sunni Syrian civilians. This goes to show how little western leaders understand the Sunni/Shiite divide and its implications for violence by Neanderthals, on both sides, unable to live but in the past.

Brussels will not be the last target, nor will western citizens, unfortunately, ever feel safe as long as Iran is aimed, like a missile, against Arab Sunnis the result of an Iran Deal concocted by amateurish politicians. Furthermore, we hope this is a lesson to all western leaders that next time when Israel and the Arab countries agree on one thing, take their side blindly. How many times has this happened prior to the Iran Deal? Zero times. How right were they? Watch the footage airing from Brussels for the answer. Blame Brussels terror attacks on Obama’s incoherent Syria policy the result of a bad Iran Deal.

Our condolences to the families of those who perished at the hand of terror in Brussels. All of Belgium is in our heart and on our mind.

Obama Asleep, Iran Builds for an American Reckoning
You Think Obama Did Not Know This Was Going to Happen?
Obama to Release $150 Billion to Iran to Conquer the Region
Assad Genocide 427 Iranian Terror 590 ISIS Terror 121 Opinions 1006 Slippery Barack Obama 973