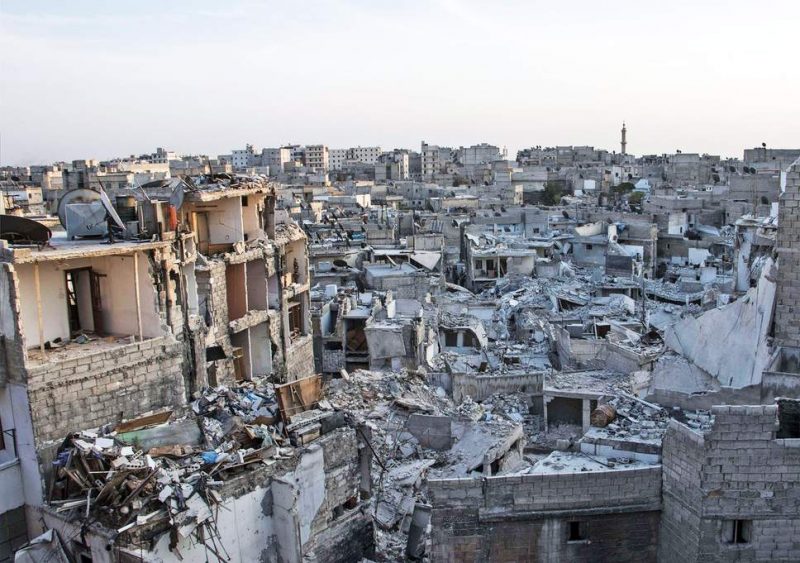 Lebanon’s civil war lasted 17 years. It ended in 1993 when, a year later, the Lebanese people witnessed the bulldozers in downtown Beirut clear the rubble and the collapsed buildings. If the noise of an active bulldozer is that symbolic, it seems, then, we have a fifty year Syrian civil war on our hands; or as long as the Assad family lasts in power.

Here is an excerpt from an article Angus McDowall wrote for Reuters:

The bodies of three-year-old Malak Kasas and two neighbors still lie under a pile of rubble in Aleppo’s Kalasa district more than two years after the Syrian government recaptured the area.

Malak’s grandfather, Omar, and uncle, Mahmoud, live in the building opposite. When they stand on the balcony, they see the collapsed building that is her tomb. Whenever Omar says her name he bursts into silent, convulsive, sobs.

The bulldozers of Syria have few decades to go before the people of Aleppo hear their sounds. If you ever read anywhere that Assad believes Syria is back to normal, think of little Malak still buried under the rubble of Aleppo.

In fact McDowall confirms it when he added:

The conflict that has killed half a million people and displaced half of Syria’s pre-war population of 22 million continues, and Reuters could hear bombardments over several nights in Aleppo from a nearby frontline during a recent visit.

Not only do we have a fifty year Syrian civil war on our hands, but the bulldozers, when they start rebuilding Syria, will need few decades more to finish the job. Little downtown Beirut took from 1993 until 2009 to finish. The last project was the renovation of the old Souks.

At TFS, we believe Syria is no more. Today, the whole country resembles a vast Madison Square Garden where boxers enter the ring, ad hoc, to knock each other’s out. The boxers come from all over the world.

We have the featherweight in ISIS, the middleweight in Iran, and the super heavyweight in the United States. In-between lies the drunkard (Russian boxer ), the pretender (Turkish boxer), and the non-existent (Assad boxer).

Those boxing matches are going to continue throughout the fifty year Syrian civil war. When in doubt, think Lebanon.

Does Anyone Really Believe Assad Has Won in Syria?
U.S. Says Syria Is Buying Oil From Islamic State
What Did Donald Trump Do for Syria?
Assad Must Go 101 ISIS Terror 124 Opinions 1017 Syria 450 Syria Reconstruction 31 Syrian Revolution 1335