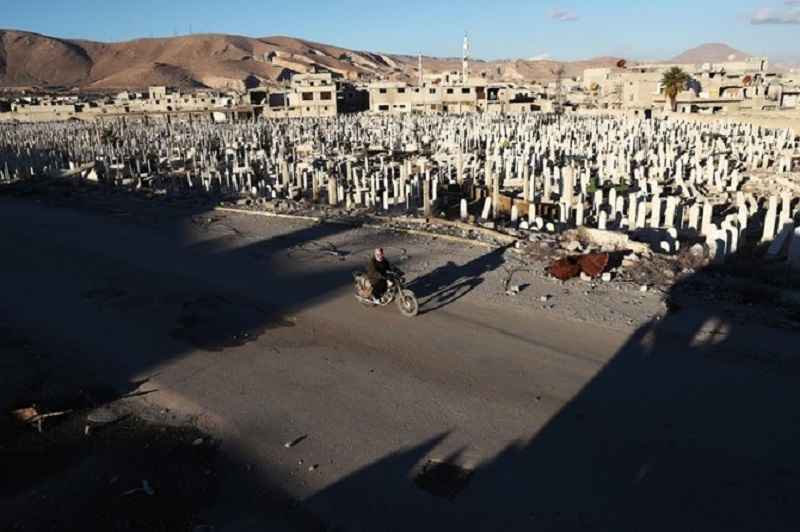 Thousands of Syrians Succumbed to COVID

The sprawling Najha cemetery outside Damascus, resting place for thousands of dead from Syria’s wars, is struggling to cope with a surge in victims from the country’s largely unacknowledged battle with COVID-19. It seems that thousands of Syrians succumbed to COVID while the Assad government claims officially only 209 cases of death thus endangering the lives of everyone.

Najha cemetery, the designated site for COVID-19 victims in the Syrian capital, usually handles around 40 burials a day.

That number more than tripled during most of July and there was a spike in August, and the numbers remain well above average, said Abdul Rahim Badir, who issues burial certificates at Najha.

While there are no independent figures for the number of new COVID cases and deaths in Syria, Badir’s account chimes with reports from some NGOs and aid workers. They say the official data reflect a small fraction of the real toll.

Senior government health officials contacted by Reuters declined to comment on the discrepancies. The Syrian information ministry did not respond to an emailed request for comment.

In 30 years of work, Badir said he had never seen such a surge in burials. Some relatives held their ceremonies at night to avoid bodies piling up.

We are already digging a mass grave that could bury thousands.

Syria’s health system, shattered by a nine-year war and lacking equipment to detect the virus, combined with millions of people made vulnerable by impoverishment and displacement, makes it highly susceptible to the pandemic.

Yet it has reported only a fraction of the cases registered by its neighbors.

The World Health Organization, which did not challenge government statistics in the early months of the pandemic, said recently that Syria’s limited testing capabilities hid the scale of the crisis. Particularly around the capital.

A lot of cases are still going unreported, and the actual number of COVID-19 cases is much higher … Damascus and rural Damascus are the hardest hit.

A senior coordinator in a major Western NGO, who spoke on condition of anonymity, said there had been a “major and unprecedented spike in July and most of August”. It averaged 120 daily deaths, easing to around 60 last month. To add insult to injury, Assad refused to release any political prisoners durimng the pandemic.

Members of the Syria Medical Association took the unusual step in August of going public about losses among their colleagues to COVID-19.

This is a list of 61 of Syria’s best doctors, who Syria lost in the last few days.

Since then there have been at least another 87 confirmed deaths of medical workers, a source in the association said.

Other professions have also suffered. The head of the Syrian Lawyers Union, Al Firas Faris, warned colleagues in a letter on Aug. 9 about a “large spread of the pandemic in state courts and the deaths of a large number of lawyers”.

At the peak of the crisis, medical shortages at Damascus hospitals meant some middle class homes became treatment centers. Hard-pressed health officials appeared on state media to encourage the trend.

Since then U.N. and NGO support has helped authorities stock up on equipment, easing some pressure. Some hospitals asked patients to get their own beds and oxygen canisters to secure a space, two medical sources and an NGO worker said.

But the congested public markets and streets of poorer areas offer the virus the chance to break out again.

“Conditions are all there for it to spread quickly and this is what is happening. Damascus and rural Damascus are the hot spots,” said Matt Hemsley, a Damascus-based Oxfam policy adviser.

Thousands of Syrians Succumbed to COVID