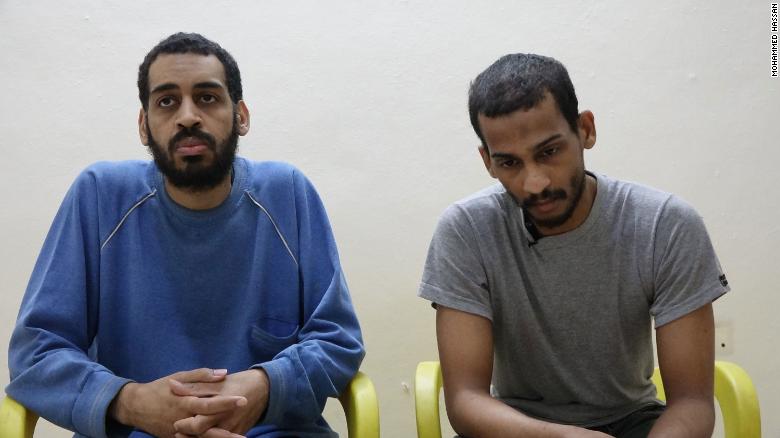 October 9, 2020 9:41 am 0
Hariri Squeezes Terrorist Hezbollah That Killed His Father
We Will Bury Hezbollah in Syria
How to Catch Iranian Sleeper Cells

Two Islamic State militants from Britain were brought to the United States on Wednesday to face charges in a gruesome campaign of torture, beheadings and other acts of violence against four Americans and others captured and held hostage in Syria. Let ISIS members who killed Americans rot in jail until they die for their terror and actions to fuel hatred and violence.

El Shafee Elsheikh and Alexanda Kotey are two of four men who were dubbed “the Beatles” by the hostages because of the captors’ British accents. The two men made their first appearance Wednesday in federal court in Alexandria, Virginia, where a federal grand jury issued an eight-count indictment that accuses them of being “leading participants in a brutal hostage-taking scheme” that resulted in the deaths of Western hostages, including American journalist James Foley.

The charges are a milestone in a yearslong effort by U.S. authorities to bring to justice members of the group known for beheadings and barbaric treatment of aid workers, journalists and other hostages in Syria. Startling for their unflinching depictions of cruelty and violence, recordings of the murders were released online in the form of propaganda for a group that at its peak controlled vast swaths of Syria and Iraq.

There is a long history of U.S. determination to pursue and capture killers of U.S. citizens abroad. The most prominent of which is the execution of Osama bin Laden on the spot hiding in plain sight in Pakistan. But there are many, many other small cases the enemy seems to forget. We believe these Islamists are too dumb to realize they cannot escape American justice.

TALK ABOUT THE RESUME OF A KILLER

Take for example the case of Imad Mughnieyeh. He was a Hezbollah operative who planned and executed the mass killings of U.S. Marines in Lebanon in 1983. He also contributed to the bombing of the U.S. Embassy in Lebanon when top CIA officers who were experts on the Middle East were meeting at the time. In one blow, Mughniyeh decimated the Middle East CIA Department. Did he really believe he will escape justice with such a resume?

This is what Wikipedia editors wrote about Mughniyeh:

U.S. and Israeli officials have implicated Mughniyeh of many terrorist attacks, primarily against American and Israeli targets. These include 18 April 1983 bombing of the United States embassy in Beirut, Lebanon, which killed 63 people including 17 Americans whom among them were 7 CIA officers which included Robert Ames, the head of the Near East Division.

Mughniyeh was also accused of planning and organising the 23 October 1983 truck bombings against French paratroopers and the U.S. Marine barracks, attacks which killed 60 French soldiers and 240 Marines.[36][37] While a student at the American University of Beirut (AUB) on 18 January 1984, Mughniyeh allegedly assassinated Malcolm H. Kerr (father of former NBA player/current coach Steve Kerr), the school’s president. On 20 September 1984, he is alleged to have attacked the US embassy annex building.

In another instance, a Pakistani operative named Mir Qazi attacked, on January 25, 1993, the CIA HQ campus at Langley. He killed many still in their cars stopped at a traffic light. He fled the country but a joint CIA-FBI task force captured him in 1997 in the deep bowls of Bazaars in Pakistan. Eventually, after pleading guilty, the U.S. tried him and sentenced him to death it carried out in 2002.

Many other examples exist too numerous to recount.

The United States will pursue anyone who kills Americans no matter how long it takes. Something it seems hardcore Islamists like those in Hezbollah and ISIS keep forgetting.

We hope those two “Beatles” meet the same fate as that of Mir Qazi. We also hope the U.S. captures the two remaining British subjects as quickly to pay for their crimes against innocent Americans.

NEVER FORGET OUR HOSTAGES WHO DIED IN SYRIA

Never forget those western journalists, aid workers, doctors, and helpers who perished in Syria at the hands of extremists and the Assad regime. Here is a long list of their names.