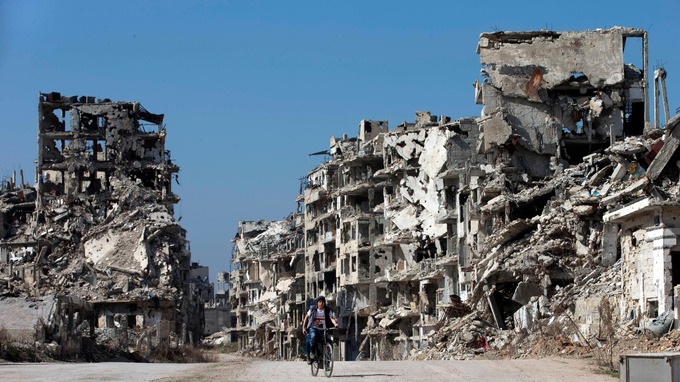 Assad main source of income is firmly in the hands of the Kurdish separatist movement the United States is protecting. US and EU sanctions against Iran and Syria have reached a firmament when Gibraltar seized an Iranian oil tanker on July 4 attempting to deliver oil to Assad. The seizure is part of a larger chess move in which the U.S. aims at re-asserting itself in the Middle East after Barack Obama yielded the region to Iran and Russia. Today, Syrians ration oil as the U.K. rationed during WWII.

Syria’s economy has deeply deteriorated amid the ongoing conflict that began in 2011, declining by more than 70% from 2010 to 2017. The government has struggled to fully address the effects of international sanctions, widespread infrastructure damage, diminished domestic consumption and production, reduced subsidies, and high inflation, which have caused dwindling foreign exchange reserves, rising budget and trade deficits, a decreasing value of the Syrian pound, and falling household purchasing power.

ASSAD, OR WE BURN THE COUNTRY

Not yet fully stone-age, since the Syrian economy belonged into the category of third-world countries before the war. But Assad has managed to bring it down to its knees. To the Aladdin cave of stone-age myths. Recovery to pre-war days is impossible. The Assad isolation, domestically, regionally, and on the world stage, compounded by lack of income and Assad partners the US has sanctioned as well, makes it impossible. The Syrian economy dying breath is echoing the slogans his supporters chanted in 2011 “Assad, or we burn the country”. They burned the country alright to keep less than a mediocre man ruling. It’s ethnic nationalism spinning as fearless bravado to yield the death of a whole country.

This is how stupid Assad and his supporters are. They would rather burn than share, destroy than build, kill than co-exist. Mission accomplished.

The end results of “Assad, or we burn the country”is one of the most polarized societies in the Middle East. The hate, the mistrust, and the immense burden of revenge have coagulated and hardened for decades to come. All other major modern events in Syrian history will take a back seat to the Syrian war the Assad family caused. The French colonization of Syria? Bring back the good times. The 1967 war with Israel? What war? The downfall of the Ottomans? Who cares?

Sadly, Syrian displacement and forced immigration has also reached deep into the ranks of the minorities of Syria. More Christians have fled the country for the comfort of Europe than Assad wants to admit. He is not willing to yield that information. His own base of support is dwindling as most realized “Assad, or we burn the country” had not been thought through as a concept. None realized the real repercussions, or felt the heat from burning the country until they uprooted themselves.

This across-the-spectrum brain drain of Syrians will have a lasting impact on Syria’s society. Especially that the war disrupted the education of a new generation of children to replace those who immigrated. Assad has managed, single-handedly, to mutate Syria into a stone age country with his dungeons of torture and death becoming the accoutrements.