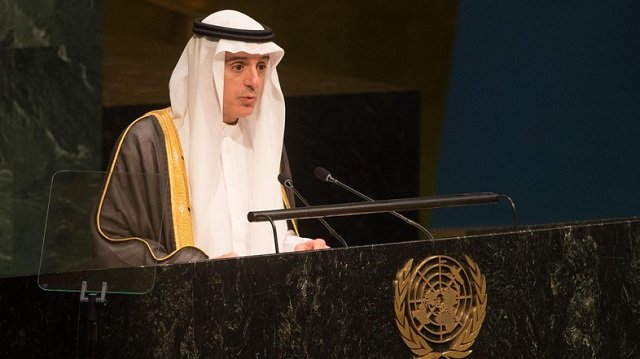 Saudi FM says to get rid of ISIS, Assad must go

October 23, 2015 5:43 am 0
Syria After Four Years of Mayhem
Hey Pussy Obama, Assad Just Established His Red Line Against You
Playing with fire

TFS Note: ISIS does not threaten Assad as both avoid battling each other whenever they can. It only threatens the Western-backed Arab regimes Iran is intent on destabilizing, and Western interests with its recruitment reach. For Iran and Russia, containment of ISIS is their goal, not its destruction. Assad is an ISIS magnet. Take Assad out, and Sunni extremist recruiting and transformation will abet considerably.Â

Source: Al-Arabiya (Saudi FM says to get rid of ISIS, Assad must go)

Saudi’s foreign minister said on Thursday that embattled Syrian Bashar al-Assad clinging in power is working as a â€œmagnetâ€ by allowing foreign militants to recruit more fighters, and he must go to rid Syria of ISIS.

After the visit, Putin also spoke with Saudi King Salman to discuss Syria.

He also urged for a â€œpeacefulâ€ solution as soon as possible, and urged for the implementation of Geneva I peace communique.

The Geneva talksÂ  – last held in January last year – marked the first time Syriaâ€™s warring sides had sat down together since the war began in 2011. They revolved around the so-called Geneva I communique, drawn up by an international conference in 2012 in the Swiss city.

Lavrov also said Russia does not see the point in providing external support for Syria without Iranâ€™s participation.

But Jubeir said Iran is part of the problem and should not be part of the solution in Syria.

Saudi FM says to get rid of ISIS, Assad must go