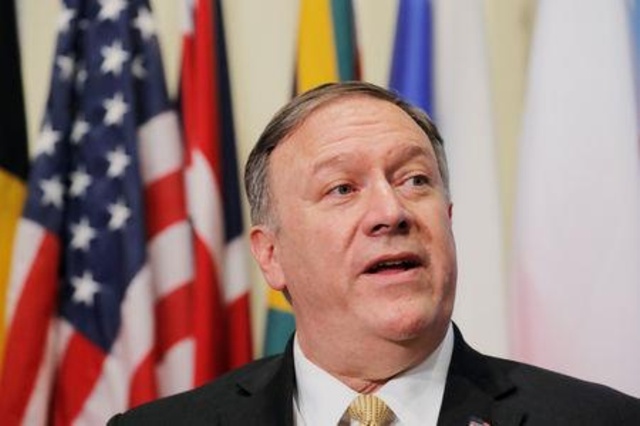 US is Preventing the IRGC Delivering Oil to Syria

August 21, 2019 6:26 am 0
We Are All United Against IS
And the Winner is… Iran’s Nuclear Program
After Its Secret Side Deals. the IAEA Needs Urgent Reforms

The United States will take every action it can to prevent an Iranian tanker sailing in the Mediterranean from delivering oil to Syria in contravention of U.S. sanctions, Secretary of State Mike Pompeo warned on Tuesday. In effect, the US is preventing the IRGC delivering oil to Syria to starve it of funds; but not preventing the brutal Assad regime from receiving oil from other sources even though the regime is under US sanctions.

Greece said earlier in the day that it had not had a request from the Adrian Darya 1, the vessel at the center of a dispute between Iran and the United States, to dock at one of its ports, as Washington warned Greece against helping the vessel.

“We want to deny them [IRGC] the resources to continue their horrific terror campaign,” — Secretary of State Mike Pompeo

The tanker, formerly called Grace 1, left Gibraltar on Sunday. Ship-tracking data on Tuesday showed the vessel was heading toward the Greek port of Kalamata. The tanker will arrive next Monday.

US TAKES A STAND

We have made clear that anyone who touches it, anyone who supports it, anyone who allows a ship to dock is at risk of receiving sanctions from the United States. If that ship again heads to Syria, we will take every action we can consistent with those sanctions to prevent that.

He said that if the tanker’s oil was sold, the revenue would be used by elite units of Iran’s Revolutionary Guards. “We want to deny them the resources to continue their horrific terror campaign,” Pompeo said.

The tanker is carrying about 2 million barrels of oil.

The vessel is cruising at low speed and there is still no formal announcement that it will arrive at Kalamata. The Merchant Marine Ministry is monitoring the matter along with Greece’s Foreign Ministry.

The ship, which is now sailing under an Iranian flag, was released from detention off Gibraltar after a five-week standoff over whether it was carrying Iranian oil to Syria in violation of European Union sanctions.

Soon after Gibraltar lifted the detention order, a U.S. federal court ordered the seizure of the vessel on different grounds. Gibraltar rejected that petition.

Tehran said any U.S. move to seize the vessel again would have “heavy consequences”. The United States in turn has also conveyed its “strong position” to the Greek government over the tanker.

Washington wants the tanker detained on the grounds that it had links to Iran’s Revolutionary Guards. The US has designated the IRGC as a terrorist organization.

The European Union, of which Greece is a member, bans oil sales to Syria; additionally, the United States has sanctions on Iranian oil sales.

The fate of the Adrian Darya 1 could also have a bearing on that of a British-flagged tanker Iran seized illegally.

Speculation has mounted that the Stena Impero could be freed once the Adrian Darya 1 had set sail. However, Iranian officials have denied any link between the two cases.

Deputy Transport Minister Mohammad Rastad said the authorities submitted the case of Stena Impero to a court in the southern port city of Bandar Abbas, the semi-official news agency Tasnim reported. It gave no date when the court would hear the case.

The handling of the Adrian Darya 1 will be a major foreign policy test for Greek Prime Minister Kyriakos Mitsotakis. He is a pro-Western conservative.

Any efforts to assist the tanker could be construed as providing material support to a U.S.-designated foreign terrorist organization, which has immigration and potential criminal consequences, a U.S. State Department official said.

A Greek diplomatic source cited by the state Athens News Agency said the country was in communication with the United States on the matter, but did not say what Greece would do.

“(The U.S.) position on the specific issue is known and has been communicated not only to Greece but other states and ports in the Mediterranean,” the source said.

It is standard practice for a vessel to give 48 hours’ notice before docking at a port, Greek officials said.

It was not clear where the ship might head if Greece refused it permission to dock.

US is Preventing the IRGC Delivering Oil to Syria