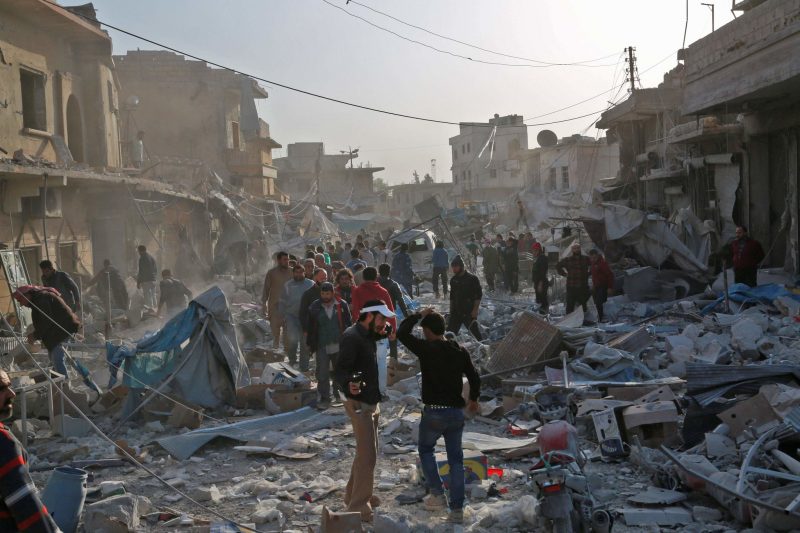 Now That Trump Ceded Syria to Putin, Assad Killing Machine of Civilians is on Steroids

November 14, 2017 6:56 pm 0
Pompeo Warns Assad Against Use of Chemical Weapons
When a Jew and a Muslim Speak in One Voice, World Better Listen
An EU Show of Solidarity, a Clash, and a Veto

Courtesy of Assad and Putin, dozens of people were killed in airstrikes on a market in northern Syria on Monday, according a monitoring group and a news agency run by activists. Now that Trump ceded Syria to Putin, Assad killing machine of civilians is on steroids.

The attacks left rescuers and survivors digging late into the evening to search for residents still buried under the rubble.

There were at least three airstrikes on the market in Atareb, a town on the outskirts of Aleppo swollen by the arrival of refugees from nearby battles. It was the latest breach of a “de-escalation” agreement that has proved largely unenforceable. Aleppo is now controlled by the Syrian government.

A police station by the market was also struck, killing an officer, according to the Britain-based Syrian Observatory for Human Rights, monitoring group that tracks the conflict with the aid of a network of contacts in Syria.

At least 60 people were killed according to the Observatory, which said the market was hit by three separate strikes. There were at least five children and three women among the dead, it said.

Atareb and the countryside around it remain outside the control of the Syrian government, which says it wants to retake all of Syria after six years of civil war that has killed at least 400,000 people and displaced 11 million others — half the country’s population. The war began after a violent crackdown against demonstrations calling for political changes in 2011. It has drawn in fighters from across the world.

Russia’s intervention on the side of Mr. Assad in 2015 turned the tide in his favor.

Atareb and the opposition-held countryside in northwestern Syria are meant to be protected by a “de-escalation agreement” brokered earlier this year by Russia, Iran, and Turkey, the main backers to the Syrian government and the opposition.

The United States, under the Trump presidency, has ceded control of Syria to Putin continuing the destructive policies of Barack Obama, which empowered the Iranian regime of terror at the expense of the sovereignty of multiple Arab countries now occupied by Iran.

Now That Trump Ceded Syria to Putin, Assad Killing Machine of Civilians is on Steroids