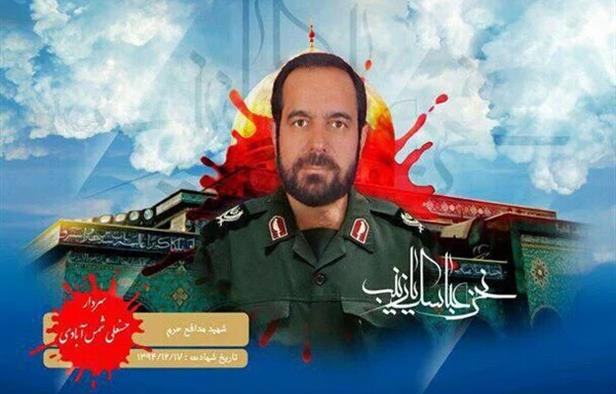 A commander of the Iranian Revolutionary Guard Corps (IRGC) has been killed in Syria, the latest casualty suffered by Iran in the war-torn country.

Iran’s semi-official Basij News reported late Wednesday that General Hassan Ali Shamsabadi was killed while performing an “advisory mission” in Syria, a day after his official retirement from the IRGC.

The Iranian report claimed that Shamsabadi was killed in the defense of shrines in Syria, though pro-opposition media outlets contend he died in fighting near Aleppo.

The general hailed from the small town of Shamsabad, which is located in the country’s north.

Shamsabadi’s death comes one month after IRGC commander Mohammad Pakpour announced the death of another commander, Brigadier General Mohsen Qaryajan, during an advisory mission in Syria.

As with the case of Shamsabadi, Iranian media did not specify when and where the general was killed.

However, a pro-Hezbollah online outlet reported that Qaryjan died during the “battle to break the siege of Nubl and Zahra,” two regime-held towns north of Aleppo. Syrian army troops, backed by Iraqi militias, broke the siege in February.

A number of high-ranking officers have been killed in Iran in recent months, including Brigadier General Reza Khavari, a senior commander in the IRGC’s Fatemiyoun Division, General Farshad Hasounizad, the former head of the IRGC’s elite Saberin Brigade, and Hamid Mokhtarband, the former chief-of-staff of the 1st Brigade of Iran’s crack 92nd Armored Division, which is considered the country’s top armored unit.

Lower-ranking officers, including Colonel Ezzatollah Soleimani—the commander of the Elite Battalion of the 44th Hazrat Bani Hashem Brigade—have also been among the dozens killed since Iran ramped up its military intervention in Syria.

The spate of casualties follow the death in early October 2015 of IRGC general Hussein Hamdani, who was one of the IRGC’s leading officers and the country’s top military advisor in Syria.

Iranian Revolutionary Guards Corps deputy chief Hossein Salami admitted in late October 2015 that that his country was sending additional advisors to Syria, which was leading to increased casualties.

However, the IRGC official did not provide a death toll and insisted that Tehran was only sending advisors, and not combat troops.