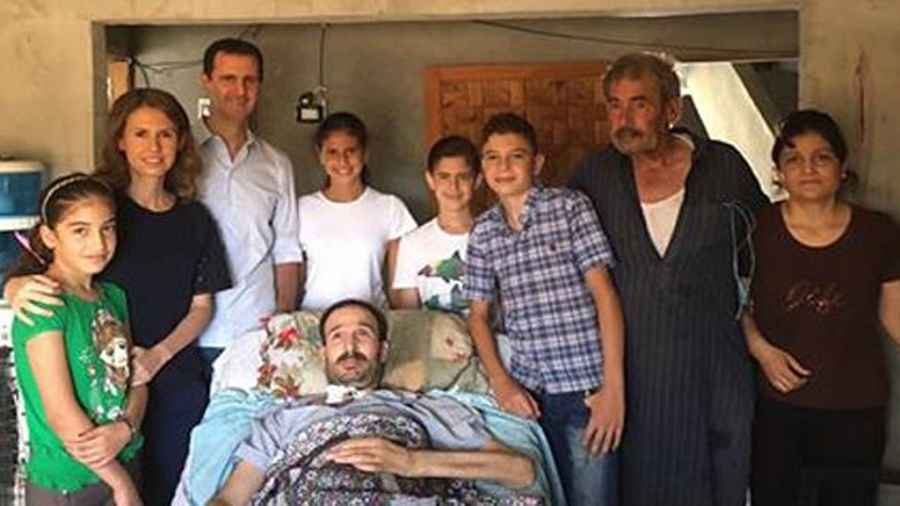 For Assad to Release the American Hostages Kidnap His Children

October 19, 2020 10:44 am 0
Imagine Another Obama-Like US President
Assad Intends Killing Second Hariri
The One Two Punch Assad May Not Survive

Reuters reported, and the Trump Administration confirmed it, that a White House official traveled to Damascus earlier this year for secret meetings with the Syrian government seeking the release of at least two U.S. citizens thought to be held there, a Trump administration official said on Sunday. Predicting what Assad might have asked in return, it is far easier and less risky, for Assad to release the American hostages, is for the U.S., through a third-party, to kidnap Assad children. Men of violence do not respond to diplomacy, and when they do, their demands harm the national security of the United States.

Considering the sanctions the Trump Administration has slapped on Syria and Iran, whose idea was it to think that Assad might respond positively. The last people on earth who want to give Trump any reason to win the elections are Assad of Syria and Khamenei of Iran. It was a desperate move by a desperate president trying to score points before November 3.

But to win, Donald Trump is willing to roll back any policy, no matter what U.S. interests he harms. We might never know what Trump offered Assad of Syria in return to free the hostages, but if it is horribly wrong, we will know after November 3. No U.S. Official, whose loyalty is to American interests first, would remain silent if Trump tried to trade US interests to serve his own.

Those who believe Iran will stop in Jerusalem, once we give-in to their demands by vacating the region, should read the history of the Muslim Caliphate al-Walid I

THE THREAT OF IRAN IS BIGGER THAN AMERICAN HOSTAGES

It is hard for any American to accept the fact that the threats countries like Iran and Syria pose in the Middle East, with their arsenal of far-reaching missiles and chemical weapons they are too willing to use on their own people, are far more dangerous to ignore. The ugly truth is that the lives of American hostages are as precious as little harm we cause our U.S. interests to return them. The greater the harm, the more the equation becomes unsolvable. That is something that most Arab regimes do not grasp.

Assad, as far as anyone who knows how his regime of terror works, would have asked for the moon in return for Austin Tice’s life. A life he snatched illegally from his loved ones, which is a matter very few talk about. The illegality of the kidnapping should transform us to think like Assad the kidnapper. Yes, we should negotiate to try and check the boxes, but we all know Assad is not a diplomat we can trade with. He is but a petty thief who is trying to rebuild a nation he deliberately destroyed. Why should we reward his terror for him to apply it again another day?

Those who believe Iran will stop in Jerusalem should read the history of the Muslim Caliphate al-Walid I. He was responsible for the invasion of Iberia, today’s modern Spain. Has the Caliphates of the Omayyad dynasty been masters of the seas the way they were masters of the deserts, they would have invaded the Americas too. Iran appeases the west by claiming its ambitions end in the Middle East.

The extreme poverty in Syria provides the CIA with a golden opportunity to purchase anyone for so little money, and to give the kidnappers safe sanctuary on American soil

NOT TRUMP NOR BIDEN

America is living an era we should dub the “Shadow Fear” era. Every President, since our failed Iraq liberation, views the Middle East region as toxic to their presidency. They fear any military defensive postures even though our weapons have leaped exponentially forward since the days when Iran could kill our troops in unprotected humvees. Wars are ugly and a president should do everything to avoid them, but when we permit a tin-can dictator whose armies are decimated and whose country is almost non-existent, spiral us like a spinning top, we are leaderless.

Trump is like Obama and Obama is like Biden. They all live fearing their own shadows, and neither has the guts to really do what it takes to free the hostages. With the exception of low-success diplomacy violent men like Assad mock daily, neither has the courage to do what needs to be done. Obama refrained from even accusing Assad of Tice’s kidnapping. No one in his administration said Assad kidnapped Austin Tice. That’s how much Obama feared his own shadow.

Of course, it is easier said than done to kidnap Assad’s son. Extracting a well-protected person in a foreign country is more difficult than killing them. But if the U.S. killed Imad Mughnieyeh in Damascus, and Qassem Suleimani in Baghdad, it can kidnap Assad’s son too. The extreme poverty in Syria provides the CIA with a golden opportunity to purchase anyone for so little money, and to give the kidnappers safe sanctuary on American soil. It’s about will and courage.

For Assad to release the American hostages, the United States must act like him. Kidnap Assad’s eldest son Hafez and you will see how fast he releases every American hostage pronto.

For Assad to Release the American Hostages Kidnap His Children

Assad Must Go. Whether He Wants To or Not.
Has Assad of Syria Threatened Vladimir Putin?
One Step Closer to Prosecuting the Sneaky Bastards
Assad Must Go 97 Assad Terror 238 Irresponsible Donald Trump 155 Opinions 999 Western Appeasement 478