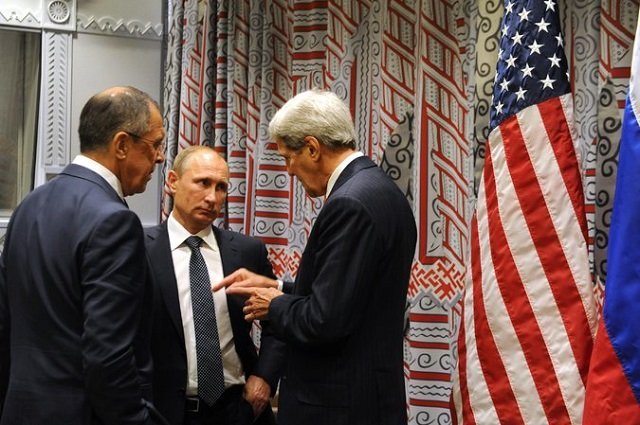 January 25, 2016 5:37 am 0
How to Kiss an Ass, by Secretary John Kerry
Even when the Buck Stops Here, Just Blame the Jews
What Assad Transition Period Mr. John Kerry?

According to an article in the al-Hayat newspaper, while Kerry was meeting with Riad Hijab, whom he did not take any public photos with so as not to offend his terrorist friend Baschar al-Assad, Kerry issued his ultimatum by reciting the very same arguments Iran and Russia have been making with regard to a solution for Syria. Mainly that the peace negotiations are to establish a Syrian unity government, not to remove Assad or transition him from power.

Furthermore, any demands by the Syrian opposition to halt killing civilians are pre-conditions that are unacceptable to the US. In effect, Kerry demanded the surrender of the Syrian people to Assad’s tyranny and torture chambers.

Tony Badran, a fellow at the the Foundation for Defense of Democracies, tweeted on this occasion the following:

More leaks on Kerry. Reportedly, he said: “Assad has the right to run in elections, and if you’re capable, don’t let him succeed.”

In other words, you are on your own. The United States is taking side with Iran and Russia.

We doubt if John Kerry realizes the extent of the coordination between the Saudis and the Syrian opposition. He believed his threats would be a private matter. Not only that, Kerry asked the Syrian opposition if it would be willing to protect the interests of Hezbollah in Syria. If true, the United States of America just lost all Arab Sunni countries in one stupid mistake made by the not-so-bright John Kerry. Imagine an American Secretary of State speaking for the very terrorists his country is fighting. It would not surprise us if Saudi Arabia recalls its Ambassador to the US to protest Kerry’s treachery. Truly unbelievable.

Maybe John Kerry can speak for ISIS next.

In one small meeting, John Kerry tossed the four U.N. Resolutions aside that were voted to achieve a transition in Syria and totally capitulated to Russia, Iran, and Hezbollah. Few hours earlier, he was telling the Saudis how strong US-Saudi relations were without mentioning that he was in fact looking to protect Iranian and Hezbollah’s interests in Syria once he meets with the Syrian opposition.