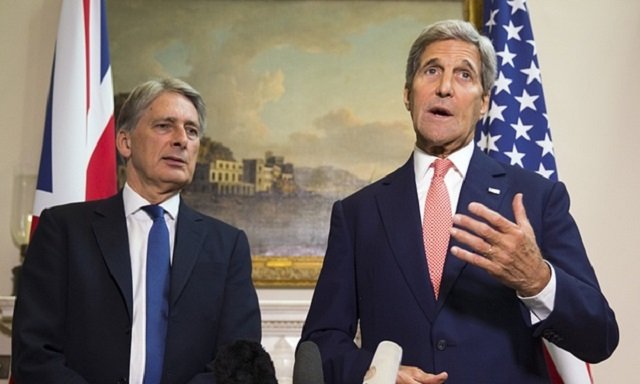 September 19, 2015 3:04 pm 0
Saudi Arabia Should Boycott Meetings With John Kerry
How Long Will John Kerry Stand Behind His Promises?
Obama dispatches Kerry on a new mission

U.S. Secretary of State John Kerry said on Saturday Syria’s Baschar al-Assad has to go but the timing of his departure should be decided through negotiation.

Speaking after talks with British Foreign Secretary Philip Hammond in London, Kerry called on Russia and Iran to use their influence over Assad to convince him to negotiate a political transition.

What fairy world our Secretary of State John Kerry lives in asking politely Putin to come to the negotiating table when Putin is upping the ante in Syria with more weapons and more support for the Assad regime? What incentives does Putin have to listen to Kerry?

Kerry said the United States welcomed Russia’s involvement in tackling the Islamic State except that Putin is more interested in tackling the real Assad opposition than ISIS Putin needs to remain marginal to justify the Assad rule. The Kerry welcome shows the extent of Kerry’s ignorance.

“We need to get to the negotiation. That is what we’re looking for and we hope Russia and Iran, and any other countries with influence, will help to bring about that, because that’s what is preventing this crisis from ending,” said Kerry.

Honestly, what fairy world John Kerry inhabits? Unless, it’s all a charade because both Obama and Putin are on the same page when it comes to supporting Assad. Who is better to unleash terror against Israel but the violent Assad must reason Barack Obama.

“For the last year and a half we have said Assad has to go, but how long and what the modality is …that’s a decision that has to be made in the context of the Geneva process and negotiation. It doesn’t have to be on day one or month one … there is a process by which all the parties have to come together and reach an understanding of how this can best be achieved.”

What fairy world John Kerry lives in where words have no meaning  and where America’s enemies are granted all the powers to decide its own fate?

Hammond, who on Sept. 9 said Britain could accept Assad staying in place for a transition period, said Assad could not be part of Syria’s long-term future “but the modality and timing has to be part of a political solution that allows us to move forward.”

Is Hammond related to Neville Chamberlain by any chance? His fairy world is as bad as the fairy world of John Kerry.

Hammond said the situation in Syria was now more complicated with Russia’s increased military involvement in the country.

“Because of the Russian engagement the situation in Syria is becoming more complicated and we need to discuss this as part of a much bigger problem – the migration pressures, the humanitarian crisis in Syria as well as the need to defeat ISIL,” he said.

Hammond left the part where the apathy of the West has permitted Russia to become more aggressive. he left the part of how weak America and Europe look when Kerry and Hammond speak.