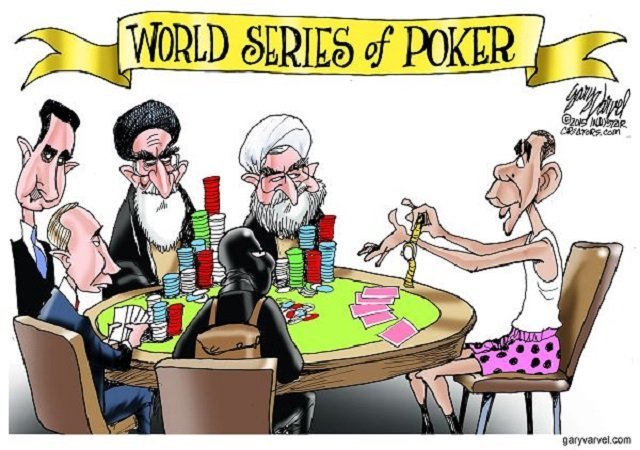 The Many Aces Saudi Arabia Holds Over Iran and Russia

In Syria’s civil war, the Assad regime quickly turned into a sectarian conflict, the major stakeholders are all playing a high stake poker game where the losers lose big and the winner takes it all. Who has what cards to play is helpful to understand at this stage, and which, to a certain extent, explains the confidence displayed by Saudi foreign minister in his interview with Christiane Amanpour of CNN. In it, he predicted the removal of Assad as a certainty. In our opinion, there are many aces Saudi Arabia holds over Iran and Russia.

Some media outlets have expressed, considering the latest military advances by Russia, that Saudi Arabia’s upcoming intervention in Syria using possibly both ground troops and its air force squadrons is based on desperation. That Saudi Arabia is using its own military assets as a last resort. This is far from the truth because Saudi Arabia holds many cards in its hands it will only deploy as necessity dictates.

Of the many aces Saudi Arabia holds over Iran and Russia, one ace Saudi Arabia has already deployed effectively is in taking advantage of its “swing” state status as an oil producer to continue pumping more oil than the market demands. This, along with other factors such as the success of the fracking American industry, has produced the lowest oil prices in over 10 years. Low oil prices harm Iranian and Russian economies, as well as the Saudi economy, which are all dependent on oil as the primary source of revenues. Except that Saudi Arabia sits on almost a $700 billion wealth sovereign fund when the Russian wealth fund will be depleted in 2016 due to forced low oil prices. On his first visit to Russia, Mohammad bin Salman offered relief in return for Russian cooperation in removing Assad from power, which Putin rejected.

Of the many aces Saudi Arabia holds over Iran and Russia is another ace, which controls the nature of the arsenal it can provide the rebels in Syria. So far, the most sophisticated weapon provided has been an aging TOW missile that has been quite effective against Syrian armor. Just last week, the rebels received missiles with a 20 km range to help them defend against Iranian advances on the city of Aleppo. Saudi Arabia has been cooperating with the West in terms of what to deliver, but if the West cannot find a political solution in which Assad is removed from power, the Saudis have the option of breaking their commitment by sending the rebels more sophisticated weapons. If John Kerry has not realized yet that Russia and Assad are not interested in a political solution, then it is hopeless to spoon feed him what a high school student might understand better than he does. Saudi patience with Kerrys’ endless meetings will eventually run out.

Of the many aces Saudi Arabia holds over Iran and Russia is another ace that is sectarian in nature. Unlike Hezbollah and Iran who recruited their fighters by claiming that Sunnis will destroy their religious shrines in Syria and that their service in protecting these shrines would open the doors of heaven for them, Saudi Arabia has not resorted to these sectarian tactics. Considering the Sunni world is over four times larger than the Shia world, any mobilization by Saudi Arabia, using the thousands of Mosques it funds from America to Asia, would truly start a war that could sweep the whole Levant.

For Saudi Arabia, who is battling Sunni extremists groups as much as it battles Iran, this is a risky proposal that may invite more problems for the region. But if Russia and Iran press on with their agenda of scorch earth strategy, then we estimate that Saudi Arabia would not hesitate starting a sectarian campaign to end Assad and possibly the Mullahs in Iran. The Wahabists of Saudi Arabia have funded over 10,000 Mosques worldwide they could easily turn into high voltage recruiting centers.

The West should keep in mind what Saudi Arabia, the Guardian of Mecca and Medina, might be able to do if Barack Obama and John Kerry keep leading from behind to the detriment of US allies in the region and in support of a terrorist state called Iran.

Many Aces Saudi Arabia Holds Over Iran and Russia