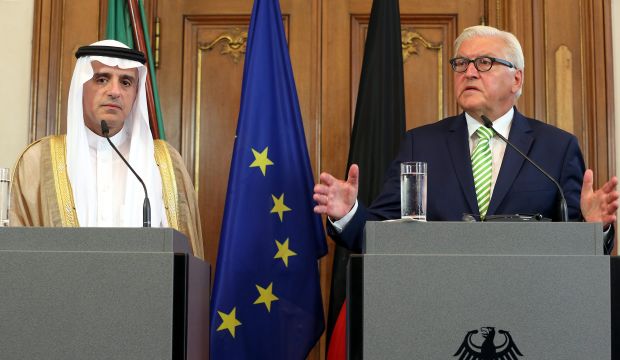 Saudi Arabia Going on the Offensive Against Iran

Saudi Foreign Minister Adel al-Jubeir said on Monday that Iran’s military role in Syria stopped it from being able to play a role in peacemaking efforts in the conflict there. Saudi Arabia going on the offensive against the Mullahs in Iran.

Speaking at a joint news conference with German Foreign Minister Frank-Walter Steinmeier, Jubeir repeated Riyadh’s view that Syria’s psychopath Baschar al-Assad, who is supported by Iran, had to leave power if peace was to be achieved.

“The question is: what must Iran do to be part of the solution in Syria? The answer is very simple:

Saudi Arabia believed Assad must step down as soon as a transitional body was set up in line with the Geneva peace talks of 2012, he said.

“After the formation of this governmental body, Assad must step down. If it is a matter of months, two or three months or less, that is not important. But Assad has no future in Syria,” Jubeir said according to an Arabic translation of his comments made in English at the news conference.

The idea that Assad might stay until elections were held and that he could participate in these elections had no prospect, he added. The majority of the Syrian people agree with this notion.

Tehran has armed the Syrian government and, by backing Lebanese Hezbollah fighters, helped Assad combat rebels seeking to end his rule in the four-year-old conflict.

Jubeir said he hoped Iran would stop interfering in the affairs of regional countries, like Lebanon, Syria, Iraq and Yemen.

“We are determined to confront any Iranian moves and we will do everything we can with what we have in political, economic and military means to protect our lands and people.”

Saudi Arabia Going on the Offensive Against Iran