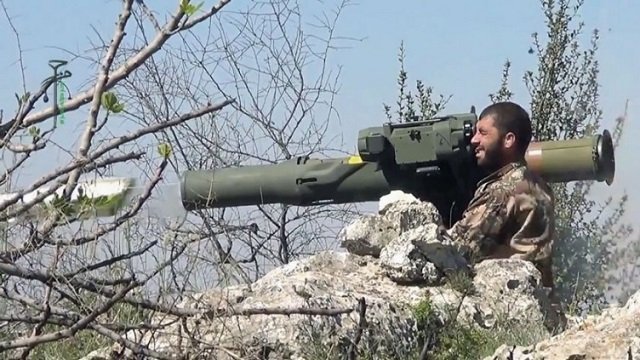 If Putin thinks Aleppo easy picking, think again. Rebels battling the Syrian army and its allies near Aleppo said on Monday they had received new fresh supplies of U.S.-made anti-tank missiles from states opposed to the gas killer psychopath Baschar al-Assad since the start of a major government offensive last week.

The rebels from three groups contacted by Reuters said new supplies had arrived in response to the attack by the army, which is backed up by Russian air strikes and on the ground by Iranian fighters and Lebanon’s Hezbollah.

The delivery of the U.S.-made TOW missiles to rebels in Aleppo and elsewhere in Syria appears to be an initial response to the new Russian-Iranian intervention. Foreign states supporting the rebels include Saudi Arabia, Turkey and Qatar.

A number of rebel groups vetted by states opposed to Assad have been supplied with weapons via Turkey, part of a program supported by the United States and which has in some cases included military training by the Central Intelligence Agency.

These groups fight under the banner of the “Free Syrian Army” – a loose affiliation of rebels that do not operate with a centralized command structure and have been widely eclipsed by jihadist groups such as the Nusra Front and Islamic State.

“We received more supplies of ammunition in greater quantities than before, including mortar bombs, rocket launchers and anti-tank (missiles),” said Issa al-Turkmani, a commander in the FSA-affiliated Sultan Murad group fighting in the Aleppo area. “We have received more new TOWs in the last few days … We are well-stocked after these deliveries.”

TOW missiles are the most potent weapon in the rebels’ arsenal. FSA-affiliated groups have also been using TOWs against government forces to fend off another offensive in Hama province, southwest of Aleppo.

Rebels there said last week they had plentiful supplies of the missiles.

Since the start of the Russian air strikes, ground offensives by the Syrian army and its allies have mostly hit areas controlled by insurgent groups other than Islamic State in parts of western Syria that are crucial to Assad’s survival.