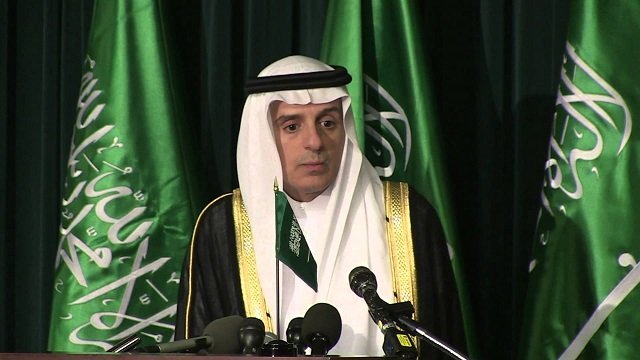 When the psychopath Baschar al-Assad continues committing atrocities against his own people by barrel bombing women and children or starving whole cities and towns, the Syrian people search for any sign of relief by any leader from around the world. People usually look for these signs among their ranks. Absent such leadership, they look elsewhere. As such, no other personality has provided the Syrian people with hope like Adel al-Jubeir. The Saudi foreign minister is fast becoming Syria’s number one hero.

Some four years ago, many living in the wider region of the Near East have stopped looking for answers from Barack Obama. The man has been a total disappointment when it comes to championing the rights of the disfranchised and the helpless around the world. He simply does not care about anyone but himself. As we said it on so many occasions before, in the chest of the first black president beats the blackest of hearts.

Absent a leader with superpower status, Syrians turn to whomever can stand by their side during these tragic times of extreme violence by the Assad regime. They found that person in Adel al-Jubeir the Saudi foreign minister whose soothing voice, boyish looks, and large doses of confidence have become a source of much comfort to suffering Syrians. His rising star among Syrians is testimony to how hungry Syrians are to raw and trustworthy leadership to replace the mass murderer who claims to have control over Syrian lives.

For example, when Assad appeared in an interview to claim he will tyrannize all of Syria again, Adel al-Jubeir appeared the next day in an interview with CNN to claim Assad will be removed by either a political process or force. His projected confidence provided Syrians with much to hope for, and it showed in the outpouring social media comments, prayers, and congratulatory notes the Saudi foreign minister received from ordinary Syrians many of whom waiting for such a personae to provide them wit hope.

From the start, Adel al-Jubeir confronted the Syrian regime at every step of the way. Unlike western leaders whose voices rose with the level of threats to their continent either from ISIS or from the flow of Syrian refugees, the Saudi foreign minister maintained a leveled and persistent crescendo against the Assad regime that highlighted its tyranny and violence against ordinary Syrians. Unlike the Europeans who reacted when their own safety was concerned, Adel al-Jubeir always reacted when the people of Syria were most threatened.

Even today, with Putin continually threatening Europe because of his bombing campaigns against civilians, not one Euro leader that stepped to the microphone in Munich called for regime change in Syria. Euro security is about Europe, not the well-being of the Syrian people. However, Adel al-Jubeir stepped up, in his interview, and forcefully told his interlocutor that by hook or by crook, Assad will be forced out.

Behind every great man in Saudi Arabia is a greater member of the al-Saud family. If it was not for King Salman and his trust in Adel al-Jubeir, Syrians would not find their hero in the Saudi foreign minister, so willing and so able to carry the weight of their cause.

Every Syrian, in their hearts, is indebted to King Salman for standing up to the terror of Assad, Putin, Khamenei, and Nasrallah.

Saudi Arabia Should Boycott Meetings With John Kerry
Saudi FM says to get rid of ISIS, Assad must go
Iran May Be Beginning to Destabilize Saudi Arabia
Opinions 825 Saudi Arabia 27