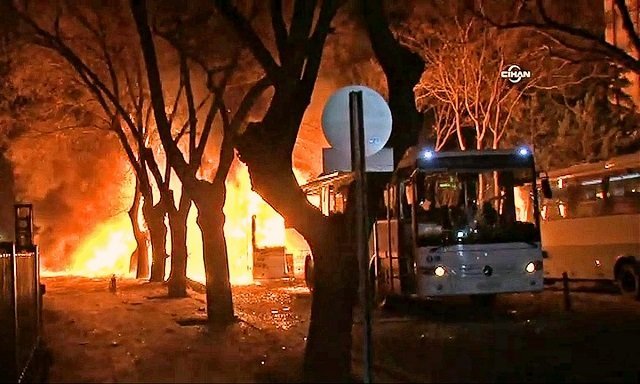 February 17, 2016 11:03 pm 0
Arab Americans Must Vote for Romney
Is Putin Abandoning Psychotic Assad?
Message to the CIA: When the Attack Dog is at Your Throat, Don’t Fiddle with his Cage Key

At least 28 people were killed and 61 wounded Wednesday by a car bomb targeting the Turkish military in the heart of the capital Ankara, the latest in a string of attacks to shake the country. Most likely, this is Assad beginning to retaliate against his enemies using his connections with YPG as a proxy to carry out the attack. Also, most probably, Saudi Arabia is next.

The blast struck a convoy of military service vehicles but it was still not clear who carried it out, said Deputy Prime Minister Numan Kurtulmus, confirming the latest toll.

President Recep Tayyip Erdogan vowed retaliation against the perpetrators of the attack, which came on the heels of a spate of deadly strikes in Turkey blamed on jihadists but also on Kurdish rebels.

The car bomb detonated when a convoy of military buses carrying dozens of soldiers stopped at traffic lights in central Ankara, creating scenes of panic and chaos.

“This attack has very clearly targeted our esteemed nation as a whole and was carried out in a vile, dishonorable, treacherous and insidious way,” said Kurtulmus.

Plumes of smoke could be seen from all over the city rising from the scene, close to the headquarters of the Turkish military and the parliament.

The powerful blast was heard throughout Ankara, sending alarmed residents rushing to their balconies, an AFP correspondent said.

Without specifying what the retaliation could entail, Erdogan warned that “Turkey will not shy away from using its right to self-defense at any time, any place or any occasion.”

“Our determination to respond in kind to attacks taking place inside and outside our borders is getting stronger,” he said.

A mini-summit on Europe’s refugee crisis gathering 11 EU countries and Turkey scheduled for Thursday was canceled due to Davutoglu’s absence, diplomats said.

In Ankara, ambulances and fire engines were sent to the scene and wounded victims were seen being taken away on stretchers.

Images showed fire-fighters trying to overcome a fierce blaze engulfing wrecked service buses that were gutted by the blast.

Turkish police threw a security cordon around the area. A second blast later rocked the area, the AFP correspondent said, but officials said this was police detonating a suspicious package.

Most likely, this is Assad beginning to retaliate against his enemies.

“We are with Turkey and its people in these difficult times,” added EU foreign policy chief Federica Mogherini.

– ‘Perpetrators will be revealed’ –

Kurtulmus acknowledged that “we don’t have any information yet about who carried out this attack” but vowed the perpetrators “will be revealed as soon as possible.” The Assad regime is known to be a master at building car bombs, and it is highly probable Assad beginning to retaliate against his enemies now that Russia is protecting his flanks.

The Islamic State group has been blamed for a slew of bombings in the country since the middle of last year but the outlawed Kurdistan Workers’ Party (PKK) has also killed dozens of soldiers in attacks mainly in the southeast of the country.

The capital was already on alert after 103 people were killed on October 10 when two suicide bombers blew themselves up in a crowd of peace activists in Ankara, the bloodiest attack in the country’s modern history.

Eleven people, all German tourists, were also killed on January 16 when a suicide bomber blew himself up in the tourist heart of Istanbul.

Those attacks were blamed on IS jihadists, as were two other deadly bombings in the country’s Kurdish-dominated southeast earlier in the year.

But Turkey is also waging an all-out assault on the outlawed PKK which has repeatedly attacked members of the security forces with roadside bombings on their convoys in the southeast.

The PKK launched an insurgency against the Turkish state in 1984, initially fighting for Kurdish independence although now more for greater autonomy and rights for the country’s largest ethnic minority.

The conflict, which has left tens of thousands of people dead, looked like it could be nearing a resolution until an uneasy truce was shattered in July.

Meanwhile, Turkish artillery in southern Turkey shelled positions of Kurdish fighters in Syria for the fifth day in the row on Wednesday in an escalating standoff, reports said.

Turkey says the Syrian Kurdish Democratic Union Party (PYD) and its People’s Protection Units (YPG) are merely the Syrian branch of the PKK and themselves terror groups.