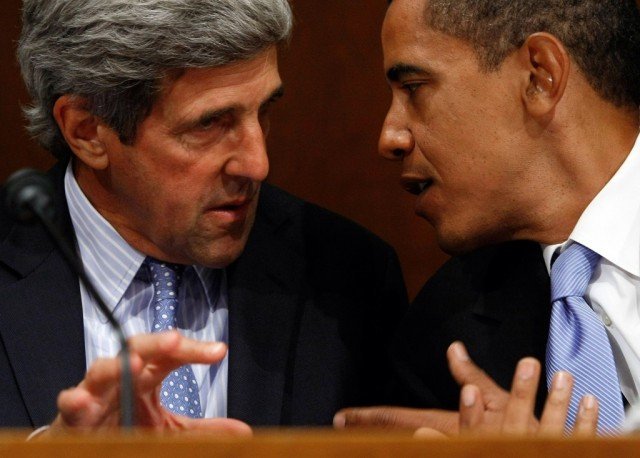 My friend and buddy Falafel asked to meet with Secretary John Kerry after he heard that President Obama has this new and exciting mission for him. How did Falafel pull this one-on-one interview with Kerry, I will never know.

After his interview on the fourth floor of Foggy Bottom, Falafel conveyed to me the recording of what this incredible new mission was all about.

Falafel: “Thank you Secretary Kerry for this interview just hours before you depart on your new and mysterious mission”

Kerry: “It is always a pleasure to speak to a Syrian. As you know, the Assads are my lifelong best and favorite friends. I consider them family”

Falafel: “I would like to ask about your new mission. Can you describe it in one sentence?”

Kerry: “Well, it is about expanding the influence of America by creating more allies around the world”

Falafel: “What sort of allies are we talking about here?”

Kerry: “The sort America can rely upon in the future”

Falafel: “Can you be more specific Mr. Secretary?”

Kerry: “I am to travel to many democratic countries around the world and convince them to go rogue. In brief, to become oppressors and terrorists for this administration to open the doors of heaven for them”

Kerry: “You see, President Obama believes that America is a fake democracy even though he was elected democratically, and since he loves transparency, he would prefer to work with nations that do not fake their democracies. Nations that kill their own people”

Falafel: “Surely, Mr. Kerry, you are not serious?”

Kerry: “We are very serious Mr. Falafel. Both Obama and I love oppressive and terrorist nations because at least they are transparent with their terror. We love transparency. What is so strange about that?”

Falafel: “What if these terrorist nations come back to bite us?”

Kerry: “Why should they when Obama opens America for them and welcomes them in his bosom? It makes perfect sense for me”

Falafel: “So, where is your first stop?”

Falafel: “What will your message be?”

Kerry: “I will ask PM Netanyahu point blank to yield Israel to Mahmoud Abbas to oppress its people. If he does, we will never bother him again about settlement issues and President Obama will have the best relations with Israel once it goes rogue and begins terrorizing just like Iran, Syria, and Cuba do”

Falafel: “What if he refuses?”

Kerry: “Then I will not issue him an invitation to my future Nobel Peace Prize award”