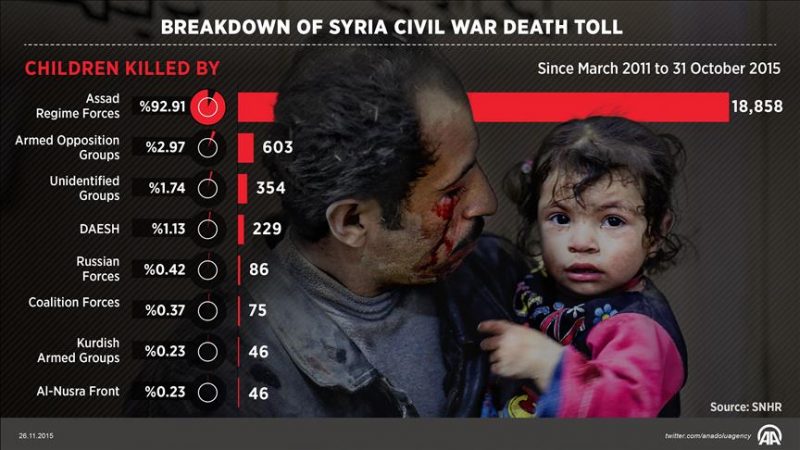 Governments must never again use fighting terrorism as a pretext to flatten cities and stoke war as they did in Syria, Jan Egeland told Reuters on Thursday as he stepped down from his role as the U.N. humanitarian adviser on Syria. Assad labeling opposing Syrians terrorists is haunting his regime today.

With that warning, Egeland has established a marker of sort. Terrorism is a serious matter; however, for Assad the terrorist  overusing the word to describe his opposition is a mean to an end.

By labeling as ‘terrorist’ every organization and every human who opposes his world of torture and death, no one will take Assad seriously the next time real terror descends upon Syria. Screaming bloody wolf has its limitations.

Too many said that since we’re fighting terrorists we’re allowed to smash the whole place – to me that is a violation of every humanitarian principle. The war on terror needs to be reexamined.

These words will fall on deaf ears back in Damascus. However, as Chemical Assad assumed the west will pay to reconstruct the Syria he smashed into pieces, Assad is repeating the same mistake. He is assuming that the overuse of the word ‘terrorist’ to describe women shopping in markets, or children at schools, is a straight line between two points. We assure you, it is not.

Branding all opponents as terrorists made it harder to negotiate, to do humanitarian work and to protect civilians, Egeland was saying in defense of the U.N. work. By all accounts, this was exactly Assad’s goal. Until he realized how little his presidency, over ruins, matters.

Egeland told Reuters that Assad leveled Syrian cities like World War II battlegrounds leveled Dresden and Stalingrad. But Assad should not savagely kill a widow with five children in Syria’s rebel-held city of Idlib just because real terrorists exist in the same town or region.

Take Israel for example. Many groups surround it with different agendas. There are the Palestinians who are intent, after 70 years of fighting (and losing every fight), on terrorizing the Jews. They terrorize because it is a business that feeds their families by a well-oiled machine Islam created because of its enmity with Judaism.

In fact, much of Gaza is opposed to Israel. Do you see the Jewish State flattening it?

Besides the Palestinians, among Arabs in every country in MENA, you will find the would-be terrorists , the haters, the foes, the ignorant followers, the neutrals, and the rare compassionate (with the Jewish cause). Do you see Israel call them ‘terrorists’? Do you see Israel flatten their neighborhoods or town? There is a good reason for that. The overuse and the over-application of the word ‘terrorists’ diminishes, in the long-run, its value.

ASSAD IS DUMBER THAN YOU THINK

Assad does not realize the long-term impact his labeling, concocted to submit Syrians to his will, has on the longevity of his regime. We see the effects today. Very few refugees are willing to return to Syria. Furthermore, the west funding the reconstruction of Syria is a non-starter without a political solution.

Honestly, Assad labeling opposing Syrians terrorists is the dumbest move the Assad regime has mustered. Yes, he flattened cities and re-submitted many Syrians to his will. But at what cost with almost 6 million refugees unwilling to return, and a Syria lying in ruins.