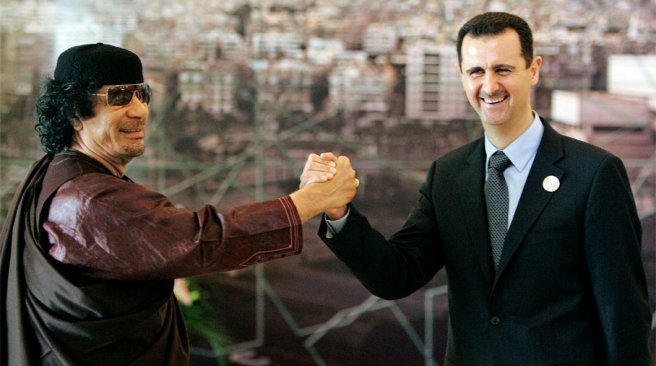 Is Libya Without Qaddafi Worse Than Syria With Assad?

February 15, 2016 7:30 am 0
Every Syrian is a Simon Wiesenthal In-Waiting
Fighting on Three Fronts, the Regime Implosion is Inevitable
The Palestinian Grievance Industry

Some Western Assad supporters have a new line to explain away their unconscionable support for the brutal butcher in Damascus. They say “Look at the chaos in Libya. Is this what we want in Syria?” Of course, if someone does really look hard at Libya, it is not even close to what is going on in Syria. Did Libya lose 470,000 of its own people at the hands of a Hitler-like figure? Is Libya without Qaddafi worse than Syria with Assad?

Here is the latest news from Libya.

Libya’s U.N.-backed council announced the formation of a revised national unity government on Sunday, with the internationally-recognized parliament to vote on the line-up early this week. The new government has 13 ministers and five ministers of state inclusive of three women, sources told Al Arabiya News Channel.

This looks to us, in spite of the Islamists presence, like a country that is band-aiding itself into a sovereign nation free from ruthless dictators and Islamist terrorists. In fact, Libya, which has been chaotic since the 2011 ouster of Qaddafi, boasts two rival administrations and armed groups fighting for control. For those who follow Syria, does this sound familiar? In Syria, we have four groups each aided by regional or international players.

Furthermore, a militia alliance including Islamists overran Tripoli in August 2014, establishing its own government and parliament and causing the recognized administration to flee to the country’s remote east. Again, for those who follow Syria, we have a whole nation of Muslims, which established the Islamic State caliphate. One group of Muslims in Libya takes over a government as opposed to a nation of Muslims establishing a caliphate in Syria. Which is worse? Certainly the seeds of a caliphate now the whole world is fighting.

In Libya, the fight is limited to Libya. In Syria, because of Assad’s ethnic cleansing, Europe is in danger, and Iran threatens all of our allies to include our strongest in Israel.

In Libya, there is no Hezbollah pointing its missiles at Egypt or Morocco.

In Libya, there are no terrorists gassing women and children in their sleep.

In Libya, so far, the total body count in five years is less than one month of deaths in Syria.

In Libya, there are no civilians being bombed to death from the air by a superpower led by a maniacal criminal, nor do Islamists drop barrel bombs on Libyan civilians.

This is not to say we agree with one or the other. Both Islamist rules established need to be blown into pieces, but the big difference between Libya and Syria is indeed huge. So, is Libya without Qaddafi worse than Syria with Assad?

Anyone who says “Look at the chaos in Libya if Assad is removed” is nothing but a mouthpiece for the Assad regime. Sold and traded morally and physically.

Is Libya without Qaddafi worse than Syria with Assad? Absolutely not. Nothing is worse than Assad anywhere in any country. He is the Hitler of the 21st century and those who turn a blind eye to his atrocities are ignoring very important lessons in history that could come back to bite them.

Are you reading this Robert Malley?

Is Libya Without Qaddafi Worse Than Syria With Assad?