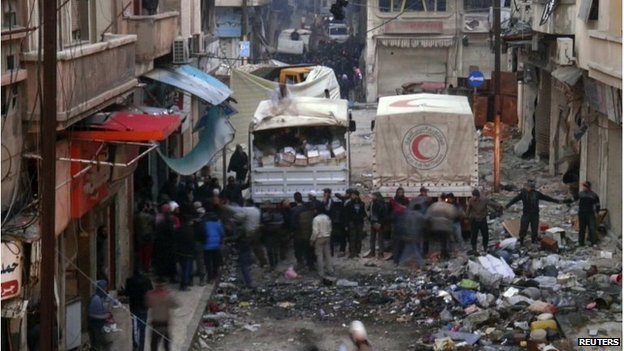 Relief convoys carrying humanitarian aid into a besieged rebel-held area of the central Syrian city of Homs came under fire for a second consecutive day on Sunday despite an appeal by the UN to government and rebel forces to respect a ceasefire, which is due to expire on Monday.

Hunger and malnutrition are rife amid accusations that  Bashar al-Assad‘s forces are trying to starve rebels into submission.

On Friday, UN and Syrian government officials agreed on a three-day truce and “humanitarian pause” which allowed about 80 women, children and the elderly to leave.

The first food packages, hygiene kits and medicine went in on Saturday, but the Syrian Arab Red Crescent (Sarc) said mortar fire impacted near its convoy and shots were fired at its trucks, wounding one driver.

No one else was evacuated from the area because of the attack, which opposition activists blamed on government forces.

“We barely got our staff out alive,” said Khaled Erksoussi, head of operations at Sarc. Syrian state TV said 600 people had left.

Sam Dagher, a correspondent for the Wall Street Journal, reported that more than a dozen men among the latest evacuees had been “whisked away by Syrian security forces to an unknown place”.

In the past, men detained in such circumstances have disappeared and there are fears the evacuation will be followed by a new assault.

The violence brought calls to respect the ceasefire, protect civilians and facilitate the safe delivery of aid.

“The UN and our humanitarian partners will not be deterred from doing the best we can to bring aid to those needing our help,” said Valerie Amos, the UN’s humanitarian chief.

The Syrian government blamed the attacks on rebels.

Homs, Syria‘s third-largest city, was one of the first areas to rebel against Assad in 2011 and has been particularly hard hit by the war.

Over the past year, the government has regained control over much of the city except for a few heavily-damaged neighbourhoods in the historic centre.

Last Friday’s humanitarian agreement on Homs was the first tangible result of peace talks launched two weeks ago in Geneva to find a political solution to end a conflict that has killed more than 136,000 people and displaced millions since it erupted nearly three years ago.

Negotiations resume on Monday at the UN’s Swiss headquarters but expectations for a breakthrough are as low as they were at the beginning.

The most that can be said is that both sides have agreed to attend a new session being chaired by the veteran Algerian mediator, Lakhdar Brahimi, who has to square the circle of Assad’s refusal to step down with the opposition demand that he must go.

Syrian government aircraft were reported on Sunday to have dropped bombs killing at least 11 people in rebel-held areas of Aleppo, according to the UK-based Syrian Observatory for Human Rights.